Today on the blog, author Jeffrey Cox discusses his writing approach and new book Blazing Star, Setting Sun. His new book about the Guadalcanal and Solomons campaign is now available to order. 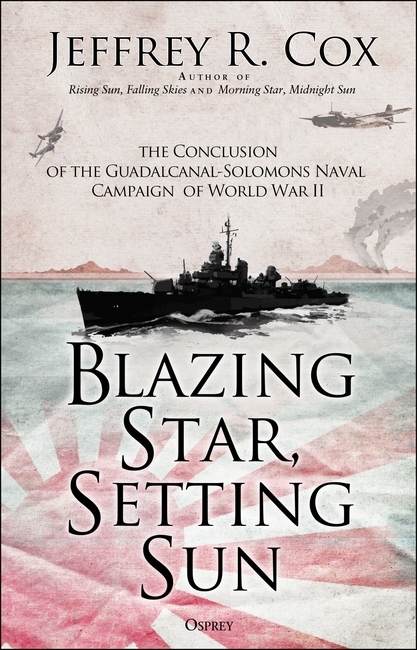 I’ve said many times that the basic principle I try to use in the books I write is “Tell the story. History is not a dry recitation of facts, names, places, dates. It is a story. You can’t have ‘history’ without ‘story’. Otherwise, you just have ‘hi’ and nothing more.” And that means “bye” to history for many people.

In essence, staying absolutely within the facts and reasonable interpretations thereof, I try to write a novel. A novel about the Guadalcanal/Solomons campaign. A factual novel that not only conveys facts, names, dates, places, and events, but also the uncertainty, the mystery, the tension, the drama – at least as much as you can in a book.

The best example I can give in Blazing Star, Setting Sun of how that differs from, for want of a better word, “normal” history writing, would be what I call “The Friday the 13th Action”, what is generally known as the First Naval Battle of Guadalcanal, in the wee hours of November 13, 1942. The battle was abject chaos, with American and Japanese ships intermixed in what some participants and observers likened to a bar-room brawl with the lights shot out.

A typical method for describing the Friday the 13th Action is to punt on explaining exactly what happened and instead go down the column of US Navy ships in order one by one to explain each ship’s own experience.

What Blazing Star, Setting Sun does is the opposite: convey the chaos. Give a minimal breakdown of the organization of the battle – the combat involving the Japanese flagship battleship Hiei, which was the focus of the engagement, and the combat not involving the Hiei. Then it goes in an order that is roughly chronological, but is more like a stream of consciousness.

But even that stream of consciousness is not absolute, if a stream of consciousness could ever be called absolute. During the confrontation between the Hiei and the US destroyer Laffey, we switch back and forth between the two ships, but also pepper it with what, say, the destroyer Sterett was seeing of that confrontation. There are also individual stories, such as Lieutenant Commander William Hank’s experience with collisions helping him avoid the Hiei’s attempt to run down his destroyer Laffey, and what Lieutenant Commander Bruce McCandless went through conning the heavily-damaged San Francisco after the death of his admiral and the mortal wounding of his skipper.

That is not typical history, but typical histories give only part of the story. They say it was chaotic and even explain how, but they don’t give the reader a taste of what it was like to be in the midst of all that chaos and trying to sort it all out. The combat with the Hiei/without the Hiei dichotomy and the stream of consciousness give the reader some structure to follow to tell what happened in this battle. But only a minimal structure, because the battle had a minimal structure. Not just explain the chaos to the reader, but use the structure of the writing to convey it.

Because that tension, drama, horror, mystery, anger, frustration, resignation … that is the story in history.