The Battle of Britain was the successful defence of Great Britain against a series of destructive air raids by the Luftwaffe from 10 July through September 1940. The outcome of the Battle was a decisive victory for the British, the first time the Germans had faced defeat in World War II.

To mark the anniversary, on the blog today, we are sharing an extract taken from the groundbreaking new book To Defeat the Few: The Luftwaffe’s campaign to destroy RAF Fighter Command, August–September 1940 by Douglas C. Dildy and Paul F. Crickmore. Written at the operational level of warfare, this account tells the story of the Battle of Britain from the German perspective and the Luftwaffe’s attempt to destroy RAF Fighter Command and thereby enable the Wehrmacht’s planned cross-Channel invasion of Britain. This book is packed with over 300 images and accompanied by maps and diagrams. 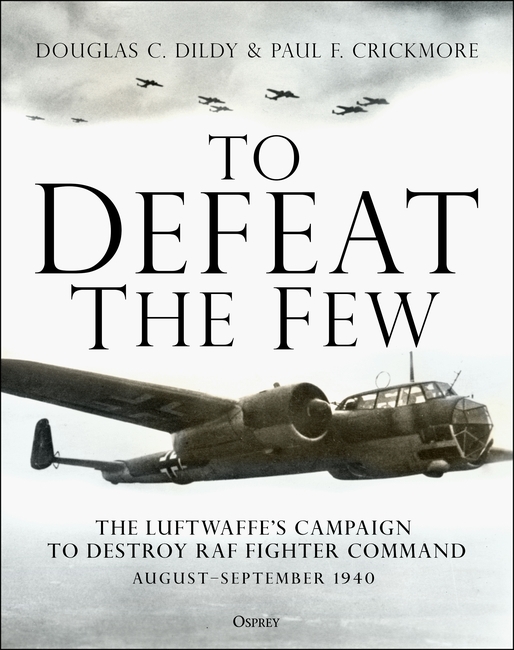 On 10 July, convoy CW3, codenamed ‘Bread’, comprising 25 small steamers covered by six Hurricanes of 32 Squadron, rounded North Foreland bound for the Dover Straits and was duly discovered by a Do 17Z ‘scout’ from Obst Johannes Fink’s KG 2. A strike was quickly organized, with I. and III./KG 2 launching 27 Dorniers from two airfields near Cambrai, joined by I./JG 3 and III./JG 51 Bf 109Es. One Staffel from each Jagdgruppe formed up on the bombers’ flanks for close escort and the other two climbed 3,000 to 6,000ft above to provide top cover. A formation of III./ZG 26 Zerstörers swept ahead on a convergent course to try and attract the enemy’s attention, the entire force totalling about 70 aircraft.

At 1320hrs, the Swingate CH Station near Dover detected the formation gathering over Calais and alerted Fighter Command HQ, which naturally assigned the interception to No. 11 Group. Park scrambled Hurricanes from 56 and 111 Squadrons, and Spitfires from 64 and 74 Squadrons, for 32 fighters in total, to intercept the raiders. 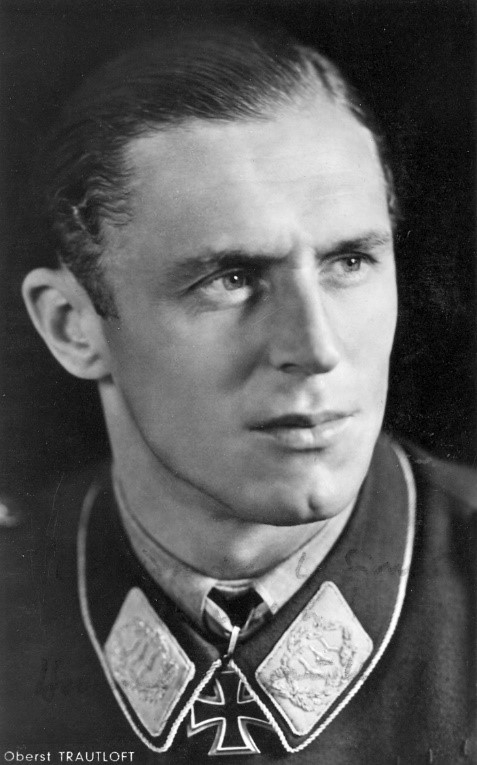 Hannes Trautloft secured five victories serving with the Condor Legion in Spain and another with 2./JG 77 during the Polish campaign. By the end of the Battle of France he had been promoted to Hauptmann, commanded I./JG 20 (which became III./JG 54), and increased his score to 11 victories. On 25 August 1940, he became Kommodore of JG 54. (Author Collection)

Twenty minutes later, Hptm Johannes ‘Hannes’ Trautloft, leading III./JG 51 out ahead of the bombers, spotted the 32 Squadron Hurricanes ahead and below and was stalking them, manoeuvring his formation into a favourable position to attack, when, one after another, the four scrambled squadrons arrived. ‘Suddenly the sky was full of British fighters,’ he wrote afterwards, ‘Today we were going to be in for a tough time.’

Number 111 Squadron charged headlong into the ‘waves of enemy bombers approaching from France’ and, already under attack by 7./JG 51’s Oblt Walter Oesau (a 15-victory ace at this point), Fg Off Tom Higgs crashed his Hurricane head on into a 3./KG 2 Do 17Z, destroying both. Higgs was killed; two German crewmen parachuted to become POWs and two others were missing in action. The rash attack failed to deter the bombers, as one of the formation leaders, Obstlt Werner Kreipe, Kommandeur of III./KG 2, reported. ‘The Channel was bathed in brilliant sunshine. A light haze hung over the English coast, and there, far below us, was the convoy like so many toy ships with wispy wakes fanning out behind. As soon as we were observed, the ships dispersed, the merchantmen manoeuvring violently and the escorting warships moving out at full speed. Flak shells peppered the sky. We made our first bomb run, and fountains leapt up around the ships. By now the fighter squadrons of the RAF had joined in, and the sky was a twisting, turning mêlée of fighters.’

After unloading their bombs, the Dorniers immediately turned for home, diving to accelerate away from the British fighters tied up by their escorts. The bombing from 4,000ft against the ships spread 150 small bombs liberally among the convoy, but hit only one, sinking the 466grt Dutch Bill S. Overclaiming, a problem that began in France and went viral over Dunkirk, resumed with this encounter. Major Johann Schalk’s Zerstörers claimed 14 ‘English fighters’ downed and Trautloft’s Jagdgruppe claimed seven Spitfires. In fact, only four Hurricanes and three Spitfires were damaged in air-to-air combat. RAF claims of shooting down three Do 17Zs, six Bf 110s and a Bf 109E inflated the actual loss of two Dorniers and three Bf 110Cs destroyed and two Bf 109Es damaged. 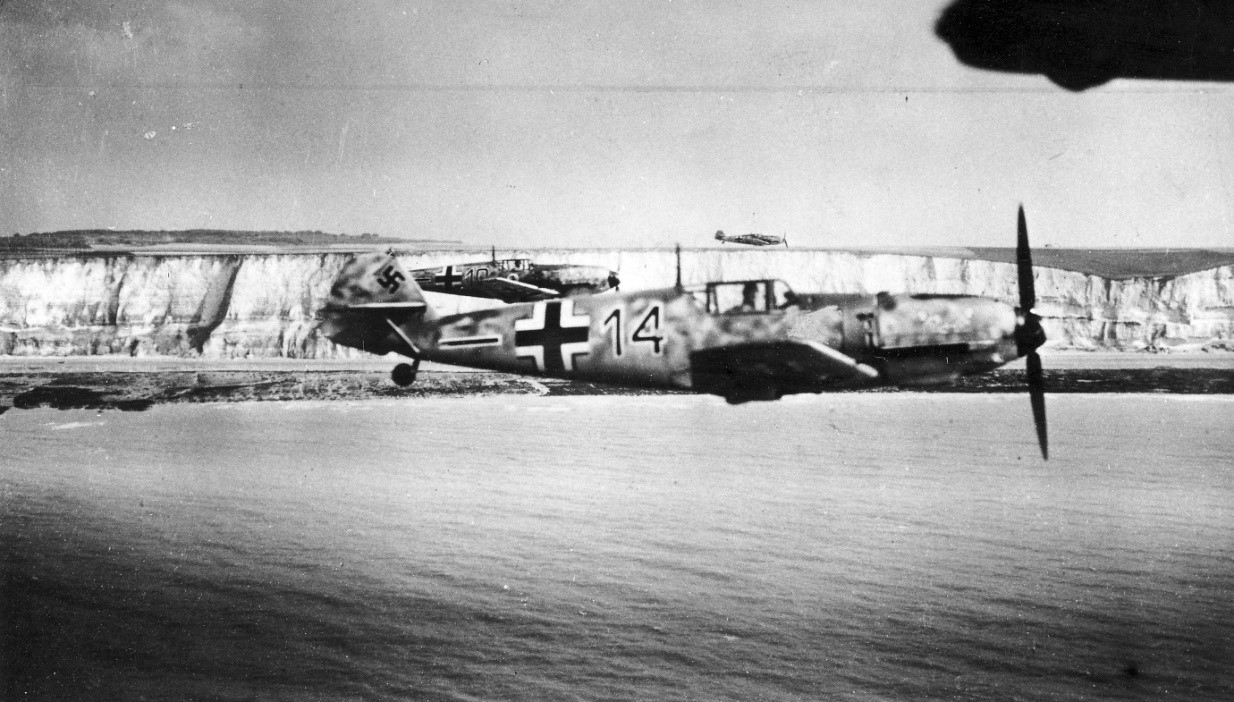 Three Bf 109E-3s of II./JG 2 low over the Channel. The pale blue sides of the fuselage and tail had been given a mottled overspray to reduce their conspicuity over the sea, as operations moved against Britain. (Jean-Louis Roba)

That same day, Hptm Bernd von Brauchitsch’s newly arrived III./LG 1 began operating in earnest, sending singletons or pairs of Ju 88As to attack harbours at Plymouth, Cardiff, Looe and Falmouth. At the last of these, two Junkers arrived overhead only two minutes after ‘Air Raid Warning RED’ (an RAF public announcement for ‘Air Raid, Your Location, Imminent’) had been announced and, with no RAF fighters anywhere nearby, delivered a devastating attack. The British tanker SS Tascalusa (6,499grt) erupted into a raging inferno and sank at its pier; the Greek SS Marie Chandris (5,840grt), packed with bales of cotton, was also set alight and burnt into a charred hulk; a Dutch salvage tug was damaged so badly it later sank.

During the next two weeks sporadic but relatively heavy individual-unit attacks on Channel convoys, Portland, Portsmouth and Dover continued but, with the exception of bombing against Dover, were largely unsuccessful. During these 14 days, Luftwaffe attacks sank eight vessels totalling 12,975 tons.

To Defeat the Few is out now. Get your copy from the website here.