The Paraguayan War, also known as the War of the Triple Alliance, was the largest and most important military conflict in the history of South America, after the Wars of Independence, and its only true 'continental' war. In this blog post, Gabriele Esposito, author of 'The Paraguayan War 1864–70', gives a brief overview of the war. 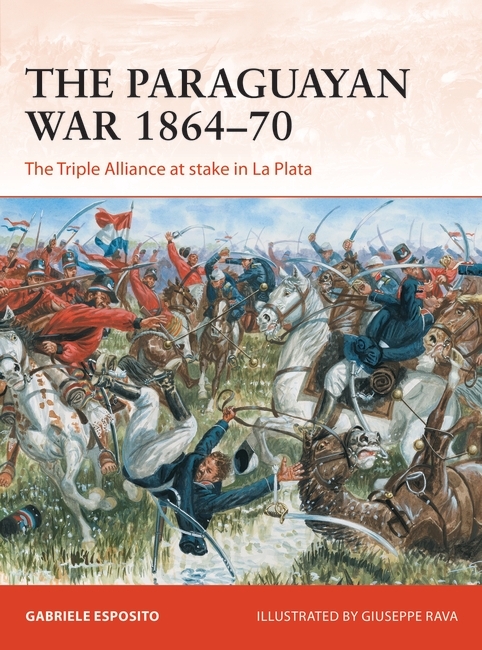 The Paraguayan War, also known as the War of the Triple Alliance, was the greatest and most important military conflict in the history of South America after the Wars of Independence which freed the continent from Spanish and Portuguese colonial rule. It involved four countries and lasted for more than five years, during which Paraguay fought alone against a powerful alliance formed by Brazil, Argentina and Uruguay (i.e. the Triple Alliance giving the war its name). This conflict was unique in South American military history for a series of reasons, primarily because of the large number of troops involved and for its terrible cost in lives. It was the only true ‘continental’ war of South America, which saw a complete mobilization of the countries fighting in it. The Triple Alliance War cost Brazil 50,000 casualties, Argentina 30,000 and Uruguay 5,000; but these were nothing in comparison with the Paraguayan losses. The catastrophic human price paid by Paraguay amounted to more than 300,000 lives, a loss of some 70 percent of that country’s total population. The numbers of this war are very impressive under many aspects: in the most important pitched battle of the conflict, fought at Tuyutí on 24 May 1866, an army of 32,000 Allied soldiers defeated a Paraguayan army that numbered around 24,000 men. The Battle of Riachuelo, fought on the Paraná Riveron 11 June 1865, was without a doubt the largest and most important naval battle ever fought by South American navies. No other war in South America was fought on such a massive and ‘European’ scale until the Chaco War of 1932–35, between Bolivia and Paraguay.

From the military-historical standpoint, the War of the Triple Alliance was a real revolution for the armies of South America. It was the first truly ‘modern’ conflict of that continent, happening in a period during which warfare was undergoing radical changes around the world. The innovations that the Europeans and North Americans experienced during conflicts like the Crimean War, Austro-Prussian War and US Civil War were more or less the same as those experienced by Paraguay, Brazil, Argentina and Uruguay in 1864–70. It is very interesting to note how during the years 1860–70 all of the  Americas were ravaged by war: in the US, the Unionists fought against the Confederates; in Mexico, Emperor Maximilian I and his European allies were at war with the Republicans of Benito Juárez; in the Andean region of South America, an alliance formed by Peru, Chile, Ecuador and Bolivia fought against Spain in the Chincha Islands War. When the Triple Alliance War started in 1864, South American armies were quite small and lacked professionalism. They were poorly trained and badly equipped, being mostly armed with old surplus weapons coming from Europe. They were semi-professional forces at best, frequently hated by the populations upon whom they preyed. The endemic political instability of their countries had transformed them in instruments of the various ‘caudillos’ (dictators), who very often used them as private armies. The innovations and harsh lessons learned during the Paraguayan War were going to change all this, in a definitive way. Every new technology available at the time was utilized, including railways to transport troops, telegraph for communications and air balloons for reconnaissance purposes. The greatest revolution took place in the field of weaponry: when the war started, most of the South American armies were still armed with old flintlock or percussion smoothbore muskets; when the war ended, most of them had adopted percussion rifles employing the Minié system. New weapons like breech-loading rifles and Gatling machine guns were tested for the first time, while rifled artillery showed its superiority on the field of battle (in 1867 Argentina was the first South American country to adopt the Krupp artillery system). These technological improvements also affected naval warfare, with steam-powered and iron-clad vessels becoming dominant and with torpedoes being used for the first time in an effective way. The new weapons changed the traditional tactics employed by South American armies profoundly: cavalry, which had always been the most important element on the battlefield, had to abandon the practice of frontal charges, transforming itself for a new mounted-infantry role. As a result, infantry and technical corps (especially engineers) became much more important than before. During the Paraguayan War military experts with the appropriate knowledge were brought in from Europe and the USA by both sides, starting a general trend that would continue in the following years. Between 1875 and 1910, all South American countries invited foreign military missions to train and organize their forces, as a first response to the new need for professionalism emerging from the Paraguayan War.

The enormous distances involved meant that the conflict was initially a matter of small columns (numbering a few thousand men) marching along the major rivers and seeking each other out in a sparsely inhabited and terrible territory. Paraguay is divided into two main regions by the river that gives the country its name: the western part, known as the Chaco, saw no major military operations. All the battles were fought in the eastern half of the country, located between the rivers Paraguay and Paraná. This area has a very humid subtropical climate, with many small rivers which run through swampy jungle valleys covered with tropical vegetation. The very abundant rainfall throughout the year, especially in March–May and October–November, created a punishing physical environment hard to endure for the majority of soldiers, who had to live and fight in marshy lowlands. In this terrible natural environment diseases like smallpox, cholera and typhoid wiped out entire units, causing more deaths than the battles. As a result, the sufferings of the common soldiers were incredible: they were supplied with poor and unreliable rations and faced a constant lack of clean water. Officers often neglected their men, while hygiene and medical were mostly non-existent. Privation, diseases and famine were the usual companions for armies on the field, which were absolutely not equipped to assist them. From 1865 the armies involved in the war started to be larger, leading to a gradual transformation in the nature of the military operations: Napoleonic-style positional battles were fought at points of strategic importance, like river crossings or Paraguayan defensive positions.

The Paraguayan War had a profound impact on the destinies of all the four countries involved in the conflict, but for Paraguay it marked a real turning point. The defeated country lost 54,000 square miles (140,000 km²) of territory to Brazil and Argentina, almost half of the pre-war extension. In addition, the remaining Paraguayan territories were occupied by the Allied troops until 1876. During the joint occupation, many tensions between Brazil and Argentina threatened to spark a new armed conflict. Initially, the Argentine negotiators proposed to simply divide Paraguay between Argentina and Brazil, but the Brazilians refused, preferring to maintain a buffer state between themselves and their old rival. From 1870 onward, Paraguay suffered a chronic economic and social crisis, since only some 28,000 of the 160,000-odd surviving inhabitants were adult males. Post-war Paraguay had a female-to-male imbalance of at least 4-to-1 and 20-to-1 in the most devastated areas.

The war helped Brazil to reach the peak of political and military influence over South America, thus becoming the major power of that continent. It was also the main cause which led to the end of slavery in the Empire, since thousands of black volunteers had taken part in the conflict hoping to obtain more personal liberty. After 1870 the military acquired a key role in the Brazilian public sphere, starting a trend that would continue for most of the Brazilian history. However, the Paraguayan War also caused a ruinous increase of public debt that took decades to pay off, severely limiting the economic growth of brazil. The war debt, alongside a long-lasting social crisis, is considered as a crucial factor for the fall of the Empire in 1889 and the proclamation of the First Brazilian Republic. After the war, Argentina faced several Federalist revolts against the central government: in any case, the conflict had played a key role in the consolidation of Argentina as a nation and all the following rebellions were thus put down by the newly-consolidate centralized government. In definitive, the war had united for the first time the whole country against a common enemy. By the end of the century, Argentina was the most prosperous nation in South America, having widespread overseas trade and a large fleet. Thanks to the victory in the War of the Triple Alliance, the Liberal ‘Colorados’ in Uruguay were able to retain control over the state until as late as 1958, defeating all the subsequent revolts of the ‘Blancos’ Conservatives. After such a devastating ‘continental’ war, the armies of South America were not the same: the need for professionalism increased a lot, as well as the continuous research for new military technologies. The old times of ‘gaucho’ armies had come to an end in the River Plate region: modern warfare had shown all its potential during the conflict of 1864–70, showing all the limits of the previous military models. The Paraguayan War had marked a real turning point in the military history of the nations that fought in it, changing forever their respective political roles.