Today on the blog Leroy Thompson, author of The G3 Battle Rifle, writes about the specifications of the Heckler & Koch G3 rifle and its use in combat.

The Fabrique National Fusil Automatique Léger (FN FAL) has been called “The Right Arm of the Free World.” To build on that analogy, the Heckler & Koch G3 might therefore be called “The Left Arm of the Free World,” as it saw almost as much use as the FAL, around 90 countries having used the G3. Because of its roller locking design, the G3 was less sensitive to the ammunition used, making it popular in many countries where the ammunition supply was not always top quality. Its design also allowed licensed and unlicensed production in countries without a sophisticated manufacturing base.

Although the G3 owed much to the World War II German Sturmgewehr 44, of which more than 425,000 were produced, there were significant differences. Unlike the StG 44, a forerunner of modern assault rifles, which fired an intermediate 7.62x33mm Kurz assault rifle cartridge, the G3 was chambered for the full power 7.62x51mm NATO Battle Rifle cartridge. This chambering allowed the G3 to outrange assault rifles such as the AK47.

Though an estimate of around 8,000,000 G3s produced is often given, in actuality, that number is substantially higher due to unlicensed production. However, despite the large numbers of G3 rifles produced, its actual use in combat is limited when compared to other rifles such as the M16 or AK47. Its most sustained use was by the Iranians during the Iran-Iraq War, but it also saw use by Pakistan in the 1965 and 1971 Indo-Pakistan Wars. Substantial use of the G3 also occurred during African counterinsurgency warfare; Portugal used license produced G3 rifles during its campaigns in Angola and Mozambique. After the Portuguese left those colonies, some of those same rifles found their way past the arms embargo to arm Rhodesian forces during the Bush War. During Operation Desert Storm some of the combatants, such as Saudi Arabia and Pakistan, were armed with the G3, though it saw little actual combat. However, the ubiquity of the G3 is quite apparent as it has turned up and continues to turn up amongst insurgents all over the world, most recently in the Lebanese Civil War and Syrian Civil War. 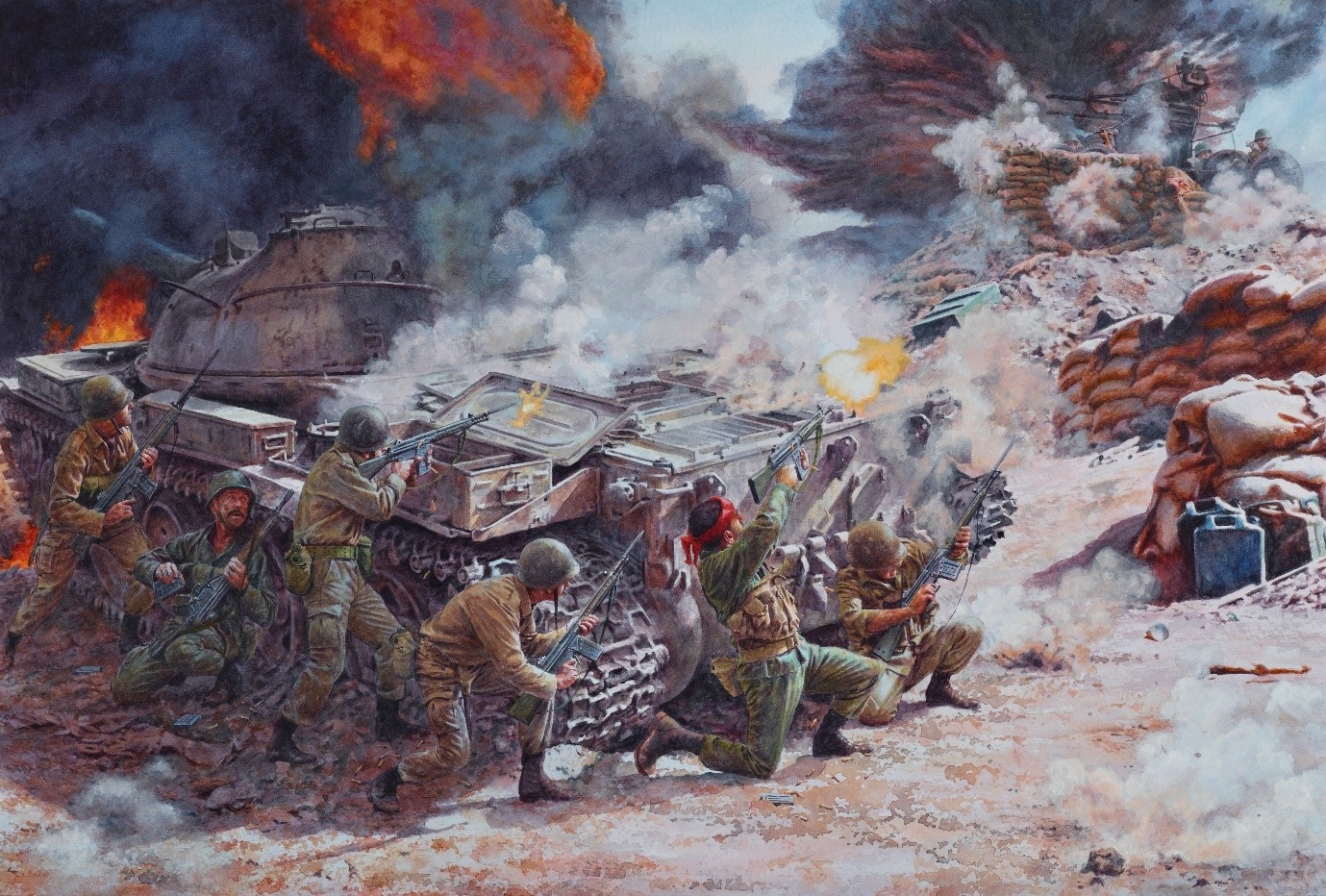 Iranian troops, armed with the Iranian-manufactured version of the G3, during the Iran–Iraq War sheltered behind a knocked-out tank to engage Iraqi troops
Artwork by Steve Noon & Alan Gilliland featured in The G3 Battle Rifle

As a battle rifle, the G3 was designed to be select-fire (i.e. single shot or full auto); however, the author and most shooters who have fired various battle and assault rifles have found that the G3 is difficult to control on long bursts. Assault rifles, such as the M16 or AK47, chambered for intermediate power cartridges, are more controllable on full auto. This difficulty in controlling the G3 on full auto fire is magnified in the G3A4 version with collapsible stock designed for airborne or mountain troops. The design of the butt plate on this model is such that on full auto, only the most skilled users of the G3 can keep the stock positioned against the shoulder when firing a burst.

The G36 attempted to address some of the shortcomings of the G3. However, it did not prove the wonder weapon its advocates hoped. Problems with the G36 were discovered by German troops when they used it during sustained firefights in Afghanistan.

Versions of the G3 designed for use as a Scharfschützengewehr (sharpshooter’s rifle), such as the G3A3ZF or G3SG/1 mount high quality German optics from Hensoldt or Zeiss and have proven accurate self-loading rifles for engaging multiple enemy troops with precise shots. The G3A3ZF with its 4x24mm Hensoldt sight has proven popular with units such as the Special Boat Service for helicopter-borne counter sniper missions where the scope’s wider field of view combined with fast shots granted by semi-auto fire allow a high hit probability. In 1997, the G36 rifle in 5.56x45mm caliber was adopted by Germany to replace the G3. However, the G3Z3ZF has remained in use as a Designated Marksman Rifle and has proven itself effective on German deployments to Afghanistan.

The use of semi-automatic only versions of the G3 as sporting rifles is still prevalent in the USA and other countries where they are legal. Heckler & Koch produced semi-auto versions of the G3 and HK33 for sale in the USA as the HK91 and HK93. A number of the G3s that were removed from service when they were replaced by other rifles had the receivers cut, with parts sold to armories in the USA that built semi-auto sporting rifles with US-made semi-auto receivers. These rifles have been very popular on the US sporting market.