Sent by the Iron Sky by Ian Gardner is the fully illustrated story of the men of Third Battalion, 506th Parachute Infantry Regiment, 101st Airborne Division in World War II from their entrance to the war on D-Day to their heroic defence of Bastogne and occupation of Berchtesgaden at the war’s end. 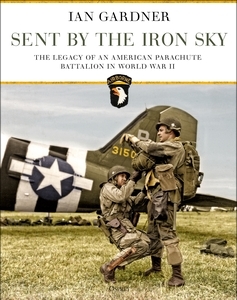 “I was in a large tool shed on the northern side of the railway junction, peering across the tracks through my field glasses. It looked like the entire German Army was coming my way in what seemed like one black solid mass. I took two men and moved forward along the edge of the embankment. We’d only gone about 25 yards when we heard German voices coming from the other side of the tracks. I threw a grenade and scrambled across the railway lines and found myself looking down on a dozen or so enemy soldiers, who were standing in a wide waterlogged ditch on the other side. Simultaneously, they lifted their heads and looked up toward me. They were so close I could see the horror and panic in their eyes. I emptied an entire clip from my TSMG into their faces and ran like hell back to the CP. Although I did not realize it at the time, that shooting became a defining moment that haunted me for the rest of my life. When I got back to warn the platoon, Lieutenant Andros told me that Harry Clawson had been hit and I was now the new platoon sergeant.”

While Bennett had been away, Andros and Clawson had been desperately trying to contact the battalion by handheld radio when a shell had exploded, killing Andros’ signaler and wounding Clawson. Andros himself was incredibly lucky to escape with nothing but a flesh wound and a dent in his steel helmet. Three or four men from the platoon started firing from the corner of the signal house as the enemy tried to advance across the junction. During the exchange of fire Second Lieutenant Willie Miller was seriously wounded in the neck. The crossing soon became cluttered with enemy casualties as grenades were exchanged back and forth. But with the enemy pushing forward on both flanks and overrunning vital positions, it was impossible to remain. Meanwhile due to lack of stretchers, Dr Morgan and his medics, who had come forward with Sink, were unable to remove all the wounded from the house. Morgan decided to stay and look after the remaining casualties until the rest of medics could return. It soon became apparent that they would not be coming back, so when Andros and his men pulled out, the “Doc” opted to stay behind with the remaining wounded, including Clawson and a young machine gunner called Morris Thomas. As Bennett later recalled:

“With enemy troops about to envelop our position from both the north and south, I decided to cover the withdrawal with my 60mm mortar and two men. There was a wooden hay cart behind the house and Alex climbed on top to spot for me. I held the tube almost vertically and let the first bomb go. Open-mouthed we all watched as the shell launched directly above our heads and came down no more than 10 yards away! At least it gave me a starting point from where I was able to adjust and drop the other shells more accurately behind the embankment. We could hear screaming coming from the other side of the tracks. I think our shells temporarily fooled the Germans into thinking that the spot had been zeroed by artillery, which at least kept them from trying to cross the railway line again. At this rate I only had enough mortar ammo to last me for about ten more minutes but it bought enough time for Andros and the others to get out. When I ran out of ammunition I threw the tube into a waterlogged ditch. Dr Morgan did not want to leave when I told him it was time to go. Pulling myself smartly to attention, I saluted and told the Doc that I would do my best to get back.”

Bennett had only been gone a few minutes when the signal house was overrun, and despite his protests, Doctor Morgan was marched to the nearby town of Ommeren. Although their injuries were by no means life-threatening, Clawson and Thomas were left behind. Morgan glanced back and saw a column of dense smoke rising from the building and thought of the two men now trapped inside. At some point afterwards the Germans moved the bodies of Clawson and Thomas to a forward aid station on the southern side of the railway embankment, where they had established a temporary cemetery. The corpses of the two Americans were then buried on the northern side of the tracks, presumably to keep them separate. Over the weeks that followed, the shallow graves were covered by floodwater and any external sign of their existence washed away. 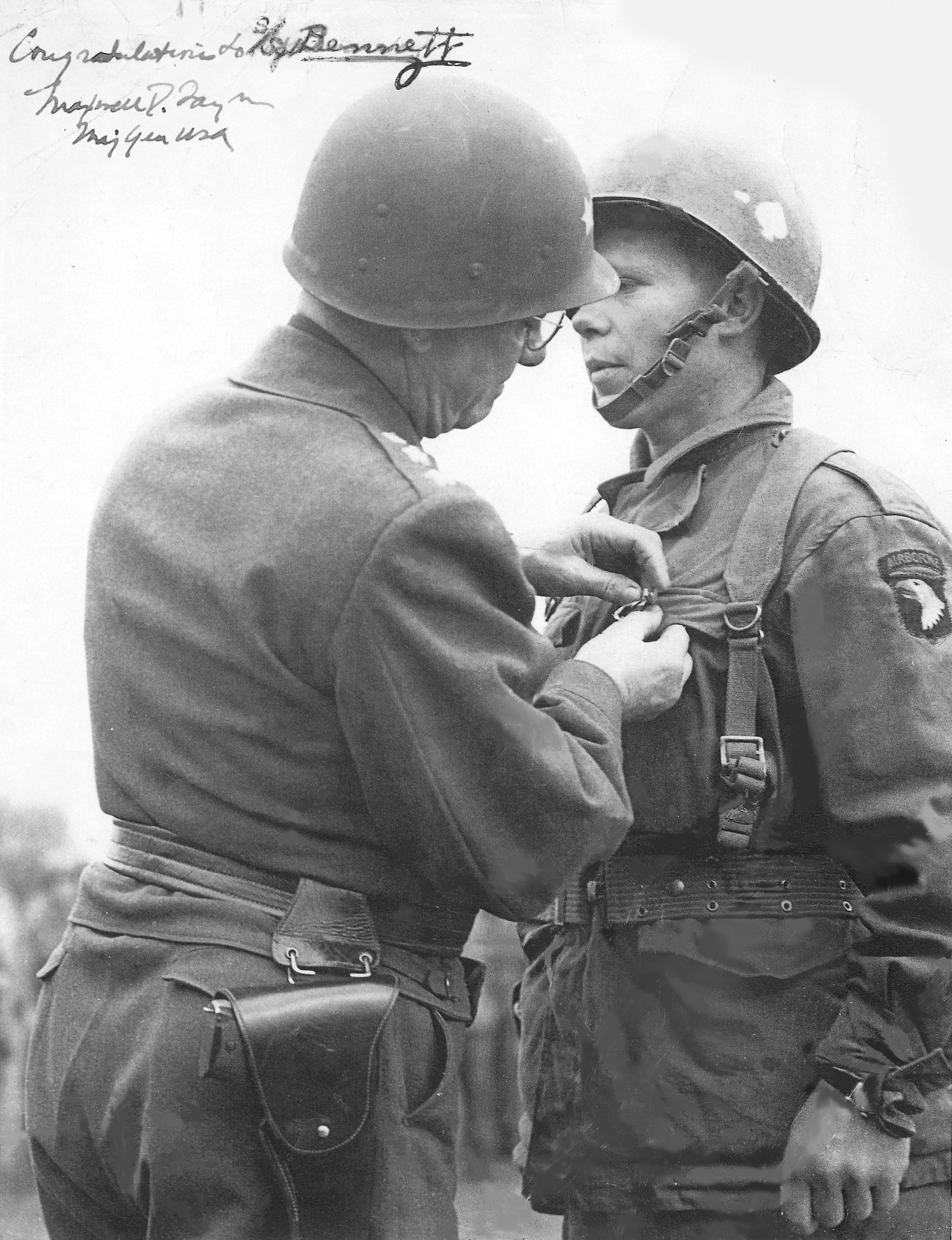 Ralph Bennett seen here on November 12, 1944, receiving his much deserved Silver Star from LtGen Lewis Brereton. The 60mm mortar sergeant won the award while covering the withdrawal of H Company from Opheusden on October 5. (Ralph Bennett)

Want to read more? Pre-order your copy of  Sent by the Iron Sky now!