Reality's Edge is a cyberpunk skirmish wargame written by Joseph McGuire. On this blog he gives a little more insight into what you can expect from the game when it hits the shelves in August!

Greetings Sprawlers!  Welcome to the first of several  blogs discussing Reality’s Edge, its creation, and contents. The blogs will be coming over the next couple of weeks leading up to the release of the game by Osprey on August 20. To start things off, I thought I would give an overall taste about the games contents:

Reality’s Edge is an exciting 28mm wargame set in a dystopian cyberpunk future. The player takes on the role of a Showrunner, a powerful mercenary who leads a team of trusted operatives and disposable freelancers. By accepting missions from unknown entities and support from a shadowbacker, your Showrunner seeks profit, glory, and better chrome, always better chrome.

Tried and True Rules. Reality’s Edge is based on the mechanics of This Is Not a Test, the popular post-apocalyptic game released in 2015 to much acclaim. Reality’s Edge uses D10’s, and the occasional D6, and has a dynamic activation system that keeps all players in the action.

You can download the This Is Not a Test demo rules here!

Small and Unique Teams. With a low model count game, Reality’s Edge focuses on teams of between 5-7 operatives. Depending on their level of experience, each member of your team brings unique talents and access to over 30 skills, variant stat options, and other tricks of the trade. 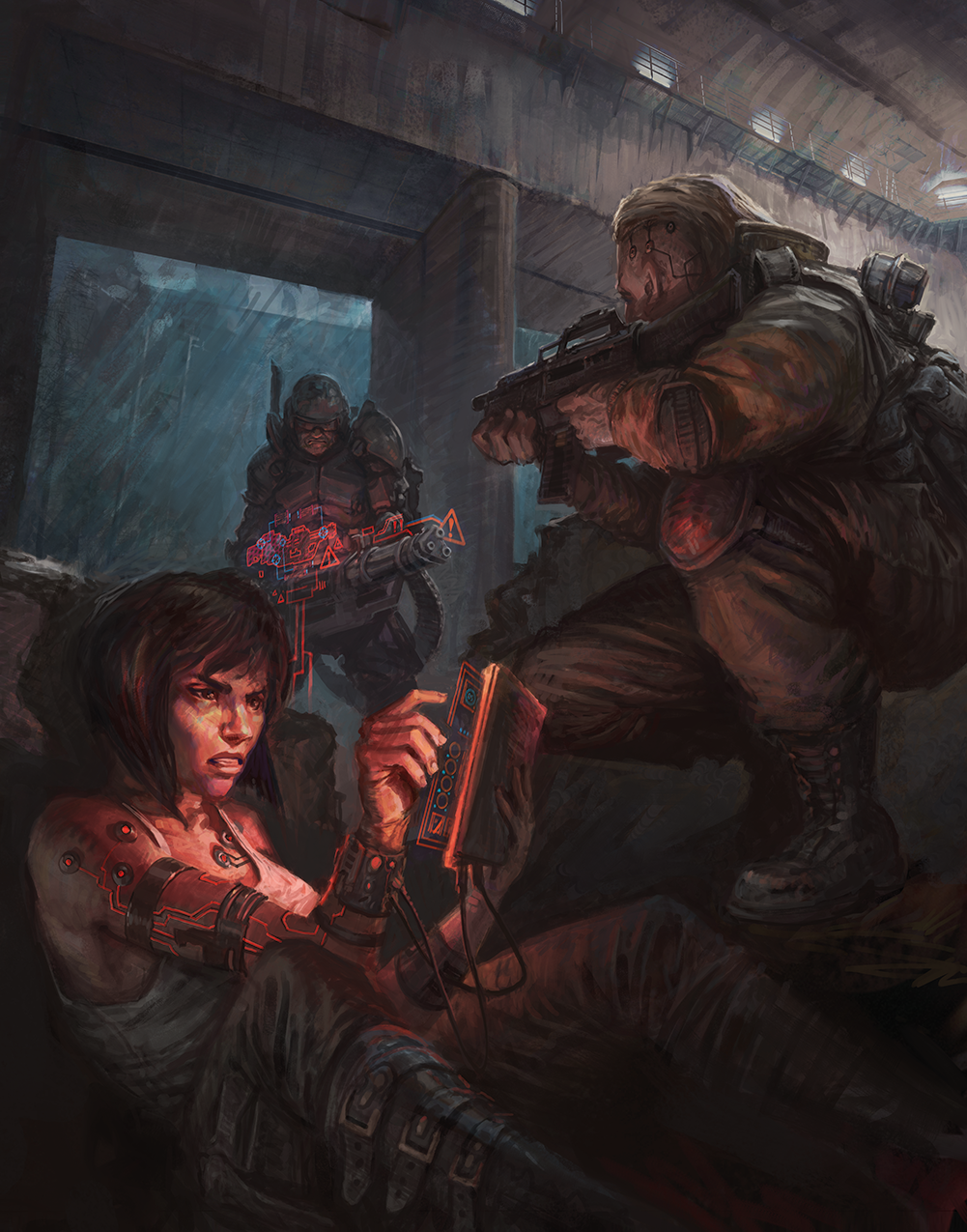 Disabling weapons, just one of the uses of hacking in Reality's Edge
Artwork by Thomas Elliott

Crew Diversity. Your Showrunner can hire numerous types of operatives, though only two of each, who bring unique skills to the crew. Sprawl ronin are deadly combatants with the ability to react before their opponents can go, while infiltrators stalk the shadows hunting targets of opportunity. Other exciting options include console cowboys, cyborgs, street docs, and more to give your unique crew lots of potential.

Cyberspace. Not just an afterthought or bolted on, Reality’s Edge hacking rules are pivotal to game play. Showrunners are accompanied onto the battlefield by their shadowbacker’s avatar. The avatars hunt virtual space looking for targets while countering your opponent’s avatar. Should they wish, your Showrunner can be accompanied by console cowboys; combat hackers who interface with local technology. Hacking allows you to breach network nodes, break enemy technology, and gain control of drones and robots. With over 20 different hacking apps in the game, your hackers have lots to do.

Dirty Jobs. The Showrunner accepts jobs from nebulous sources and it is entirely possible multiple teams have accepted the same job, which can complicate things. There are 10 scenarios the book, which means plenty of ways to get paid.   Further, before each game, players roll on the Hitch table, representing all the unique challenges of the sprawl.  From chemical pollution blocking line of site, to drug- addicted maniacs rampaging through the local sector. With so many job variables, players never have to play the same game twice.

Dark Agendas. When playing a campaign, your Showrunner is associated with a shadow backer who can provide unique access or other benefits.  You can serve the interests of a corporation, a Gov.Mil  black-ops group, a criminal syndicate, a hacktivist collective, and more.

The Sprawl. Out in the streets your crew is not alone. Independent forces are in play and your team may come up against foes who may not oppose you directly, but are still in your way. Crowds of civilians can impede your crew or provide a nice place to hide from their enemies.  But more dangerous foes include law enforcement, street punks, private security forces, and various other nasties that call the dark alleys of the Sprawl home.

Experience Counts. By playing games and earning experience points, your Showrunner and their few select employees can improve themselves and acquire better equipment.  Be careful though as you let operatives into your inner circle, their fate becomes entwined with yours and expect a bigger cut of the pie. While they will not be as good as your in-house support, freelancers are cheaper and definitely more disposable.

Well that’s it for now. On the next blog I will break down the mechanics of Reality’s Edge and the difference between it and This Is Not a Test. Remember you can preorder a copy of the rules here.

You can also learn more about me and This Is Not a Test here.