On today's blog post, Tony Buttler, author of Jet Prototypes of World War II, looks at a few of the jet programmes that occurred during the war. 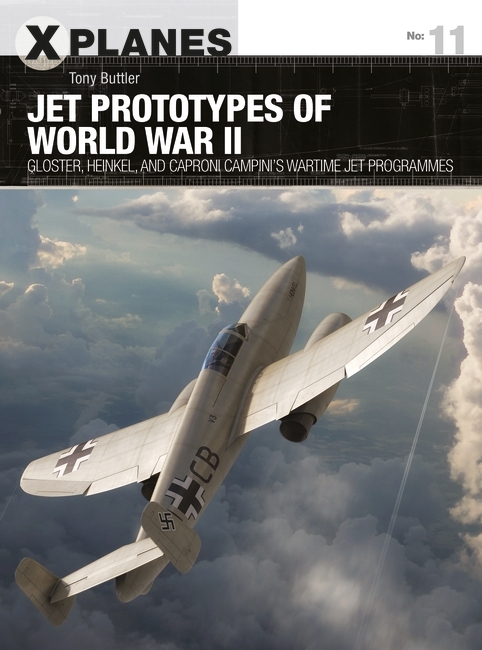 I have had the great good fortune to write books and articles on aviation history for nearly 25 years. My great passion within this field, however, a subject which of course has so many different facets and now stretches back well in excess of a century, is the design and development of military aircraft and the construction and flight test of prototype, experimental and test bed aeroplanes. So when Osprey approached me about writing a book on the very first jet aircraft to be built in Europe, well that was right in my sphere and I couldn’t wait to get started. The very first paragraph in the book sets the scene:

‘During the six long years of World War II the major nations involved developed a string of outstanding piston-powered fighter aircraft. Production types like the late marks of the Focke-Wulf Fw 190, North American P-51 Mustang and Supermarine Spitfire, plus various advanced prototypes flown towards the end of the conflict, represented a peak of development for piston-engined combat aircraft and their powerplants. Yet behind the scenes, even before war had broken out, programmes for more advanced forms of aircraft propulsion were under way in Britain, Germany and Italy. These would result in some fascinating prototypes and, although the approach taken by the latter nation would come to nothing, the development of the jet engine by the remaining two countries would lay the ground for all of the high performance military and civil aircraft produced since 1945.’

This was indeed very raw research in a completely new field and it was fascinating to see how these different nations approached their task, except that the story does not really focus on three countries, but rather three separate engine and aircraft development programmes. And these programmes were all driven, at least to begin with, by three strong personalities – Frank Whittle in Britain, Hans Joachim Pabst von Ohain in Germany, and Secondo Campini in Italy. Many books and articles have been written about Whittle and von Ohain, some good, some not, and at least one (The Jet Pioneers by Glyn Jones) looks at their work side-by-side. It is understood, however, that Jet Prototypes of World War II is the first title to describe and discuss all three together. Campini’s ducted-fan system was quite crude in comparison to the turbojets produced by the other two designers, but today it is accepted that his work fills an important part of the ‘jet’ story.

At the time of course Britain, Germany and Italy were looking at this new form of jet propulsion as an innovative way of winning a war, and one suspects few of the personalities involved (save perhaps Frank Whittle who was a true visionary) could have foreseen how the jet engine would change the world they knew so completely, and so quickly! As one might expect, the advanced nature of these new engines required the creation of much new technology, which was expensive. It is well documented that, to accompany his own efforts, Whittle had many supporters and detractors, but he wasn’t the only designer in this saga to suffer from politics.

Once established, the three engine programmes required airframes to test them, and the resulting Gloster E.28, Heinkel He 178 (and He 280 jet fighter) and the Caproni-Campini C.2 form the core of the book. Again they make a fascinating comparison. As Britain’s first ever jet aircraft to fly, the E.28 proved a great success and was eventually used for research outside just proving the jet engine. The He 178 appears to have been less successful, though many details of its flying career went unrecorded. The He 280 was pushed out by the rival Messerschmitt Me 262 jet fighter, and the C.2 was too big and too heavy to successfully test its powerplant. However, of the three jet pioneers, only Campini actually designed, built and flew an aeroplane that was powered by a propulsive system of his own creation. Both Whittle and von Ohain had to rely on specialist airframe manufacturers to provide vehicles for their engines.

The three key players in this story, Whittle, von Ohain and Campini, all realised that jet propulsion could one day provide powerplants that would take aircraft to speeds and altitudes far greater than had previously been possible. Unfortunately for Campini, his approach to jet propulsion, with a piston engine driving the compressor, proved a dead end. Germany’s adoption of the axial type of turbojet from the word go added complexity to its designs, but the experience gained would soon be put to good use by America, Britain, France and the Soviet Union. Britain’s decision to begin with the centrifugal arrangement meant that its first jet engines were simpler and more straightforward to build and were more reliable, but even in Britain it was clear from an early stage that the way forward for future projects had to be the axial jet.

In 1945 the state of the art of piston engine development had reached its peak worldwide, with some fighter types reaching speeds of almost 500mph! But the presence of a propeller would stop these machines from flying any faster. The jet engine removed any need for a propeller, thereby clearing a path to much greater speeds well in excess of the speed of sound. By any stretch of the imagination Whittle and von Ohain’s early engines were very basic equipment, very raw and completely undeveloped, yet almost immediately they were taking fighter type aircraft to speeds which matched those of current piston-powered machines. Jet Prototypes of World War II describes how a new idea for an aircraft engine was turned into reality.

To find out more, preorder your copy of Jet Prototypes of World War II.