Søren 'Bloodbeard' Bay from Bloodbeard's Garage is back on the blog as he gets ready for his first game of Reality's Edge, the Cyberpunk Skirmish Wargame from Joseph McGuire. Be sure to follow his Facebook Page and check out all of his content at Bloodbeard's Garage!

Hello again fellow hobbyists! I’m back on the Osprey blog with some finished stuff. In the last blog, I got to write about how I prepared for Reality’s Edge and showed some work in progress.

Now all the stuff is done, I can pack a 3’x’3’ board with cyberpunk awesomeness and get going – my first game is the 19th October.

For the first day of gaming this system we’ll try and get two games in. We were originally planning a game of Reality’s Edge and a game of Frostgrave: Ghost Archipelago, but to better learn the rules we’ll visit The Sprawl twice.

For the first game, we didn’t want something too complex and only rolled between a few scenarios. So we’re going in to hack some CAT terminals first and then just shoot each other up in the second game. Lucky rolls mean we only have to get some White Ice and a Griefer Avatar ready. We always roll up our scenarios in good time and make the needed NPCs and objectives, expanding the collection slowly.

I’ll try to write up some good AARs of the games and perhaps get them posted here, if there’s interest in that.

Now time to show off some finished stuff.

My first crew is a mixed bunch, no overall uniform, freelancers as the book explains. And while building and painting the gang I tried coming up with some short background for them – really does a lot for the story unfolding while gaming later.

My Showrunner is a battle-hardened Enforcer, former squad leader for a security firm. He got mixed up in some bad business, a really messy job. He got all over the news network and got fired, losing pension, health care, housing, pretty much everything really. Now a Media Corporation has decided to back this old Enforcer – seeing some reality star potential in the mayhem he may cause.

Meet Sgt. Dwight aka. ‘Cliff’. You can get hurt by running into him or over him – hence the nickname. I went with a sword, shotgun, some armor and chrome arms – for swinging that sword harder. Getting some funds from his backers he’s hired a crew of more or less professional people. But having tried being utterly broke and rock bottom after a bad job, he’s kept some cash away for rainy days. I’ve only spent 650 CC (leaving 150 CC for unexpected bad stuff).

‘Circuit’ is a Console Cowboy, an essential member of any crew. ‘Circuit’ is a decent – but cheap – console cowboy. He’s a mercenary, he works where the cash is, trying any job as long as the money fits. The on-off logo on his vest represents this – he’s switched on if there’s money on the table. This Cowboy has chrome legs, all the better for running with. Despite being about hacking, you have to get to the actual terminal first to get working, and if he gets in trouble they’re great for running away. Tayna ‘Glitch’ Tanaka is a sprawl Ronin – street samurai – of Russian and Japanese origin. Those nations are shadows of their former self, but the culture lives on, and Tanaka has all the worst traits from both Yakazu and Bratva. A deadly melee killer, she has chrome legs, torso and arms. The last part of the roster is a couple of gangers. Cliff knows the gang from his time in security – no head feelings, money talks and this is cheap labor. Ina and Hogger are both members of Purple Haze. Not the most powerful gang, it’s a small player and can fly under the radar easier. Being blasted out on reality TV might have consequences Ina and Hogger can’t really comprehend – getting eyed by the Blue Dragon Clan perhaps. All models of the Purple Haze have sacrificed and arm to gang – so all have a chrome arm. And that’s the crew and their story – ready for some sprawl action. In the previous blog I showed some of the pieces I would use to take my modern board (Last Days: Zombie Apocalypse mostly) into a neon filled sprawl.

Hover Crafts: I wanted hover crafts from the start. I turned some cheap Asian ship models (thin wood, not mdf), added some bits and tried finding that 5th Element vibe. Here’s the result of those. A hover taxi and a noodle shop (great for that specific scenario as well).

Quick paint jobs with some spray paint, drybrush and brown wash. What makes these pop well is the printed details, just paper and glued on. The hover car is made from a PC mouse. There’s a lot of these out there, and they look so cool. I did what I could with this one, but might need to find another way for the windscreen. I would like to make more of these. 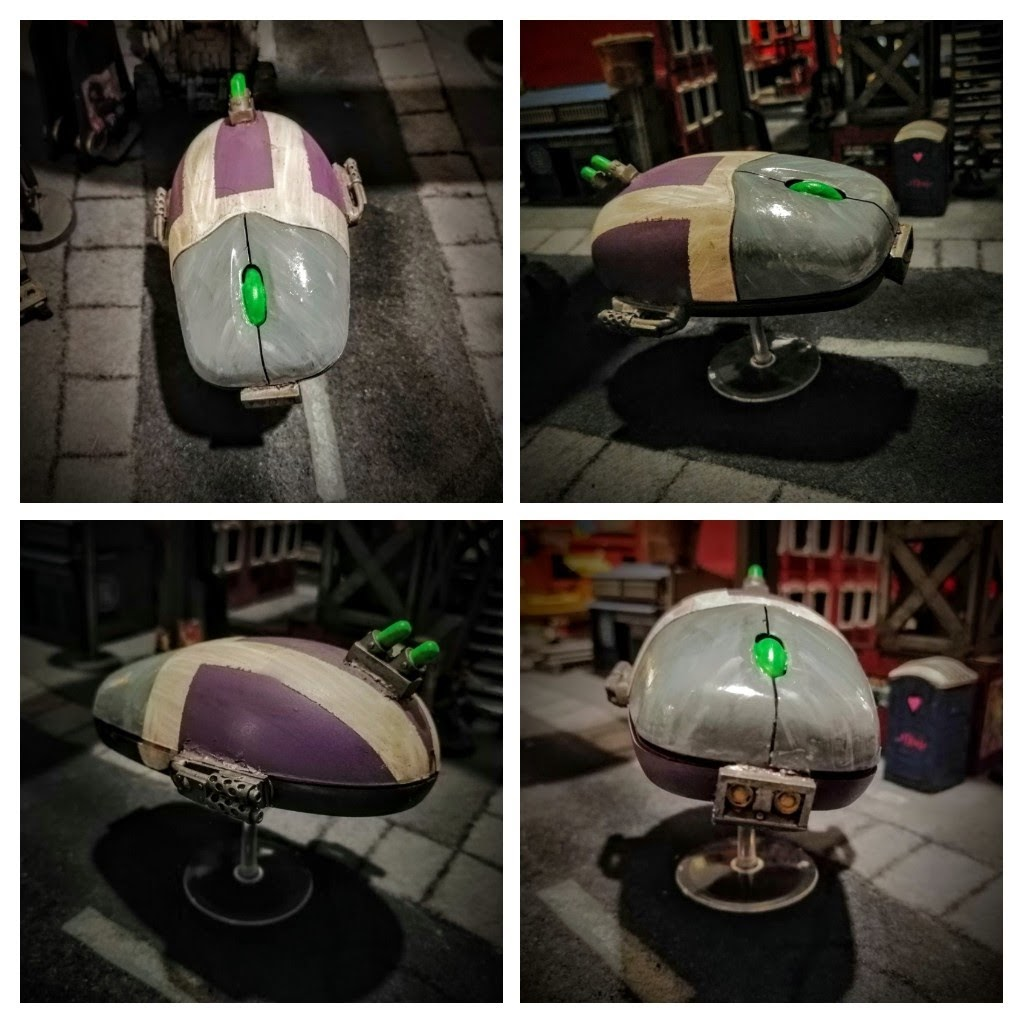 These were some cheap ebay finds as well. One is made of recycled beer cans and the other is an actual toy. I covered the windscreens with tape and base coated with spray. Black and metal on the bottom, grey inside and a color on the outside.

I painted one as a taxi and the other blue. Then, as a Firefly fan, I painted the Blue Sun logo on the roof – I’ve put this into a lot of places in the terrain. 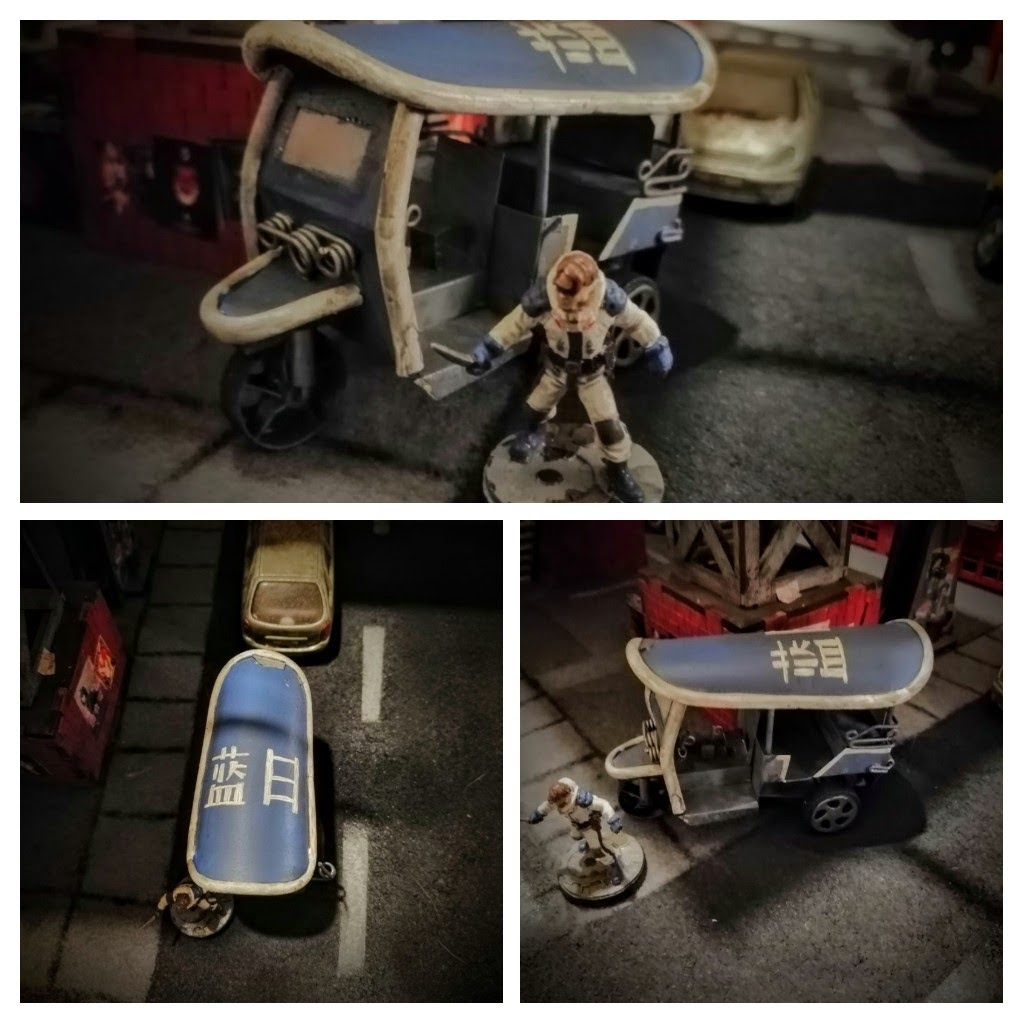 These little pieces of terrain are great. For me they add a lot of Blade Runner vibe to the streets of a city. I base coated in bright colors, added a secondary color to each and then muted it all a bit with brown wash. Again I’ve added some printed details to the builds – such an easy way to raise MDF. To end this blog I would like to show a few test setups I did. I setup up two different 3’x3’ boards, using old modern scenery and the added cyberpunk bits I’ve made. Really looking forward to gaming on these. Currently I’m working on the crowds, the bystanders and my CAT terminals have just been finished. I’ve also invested in some cheap LED lamps, that I can put inside all the buildings (like the blue temple) – to get some more lighting effects going. For most of the stuff shown on the 3’x3’ boards I have written (or will write) step-by-step blogs for my page Bloodbeard’s Garage. All the scratch build stuff have detailed posts, the other retail stuff will have blogs on painting and detailing it.

Thank you for checking, I’ll let you know how our first games go!

To see more from Søren, be sure to check out Bloodbeard's Garage and follow his Facebook Page.