The D-Day landings were one of the most complex operations of the war, and marked a key turning point in the campaign to liberate “Fortress Europe” from Nazi control. Hundreds and thousands of troops took part in the invasion, whether fighting on the beaches, manning the vast armada of ships, or providing vital support from the air. Over the years, Osprey has published many extraordinary personal stories of the men and women who took part in this historic day, and to conclude our D-Day coverage we have drawn together three extracts which offer a snapshot of just some of their experiences.

The following extract is taken from No Ordinary Pilot by Suzanne Campbell-Jones, which tells the compelling, previously unknown story of the wartime adventures of Bob Allen: pilot, aerial photographer and prisoner of war – a remarkable man who had served his country across the world from Africa to Europe during World War II. 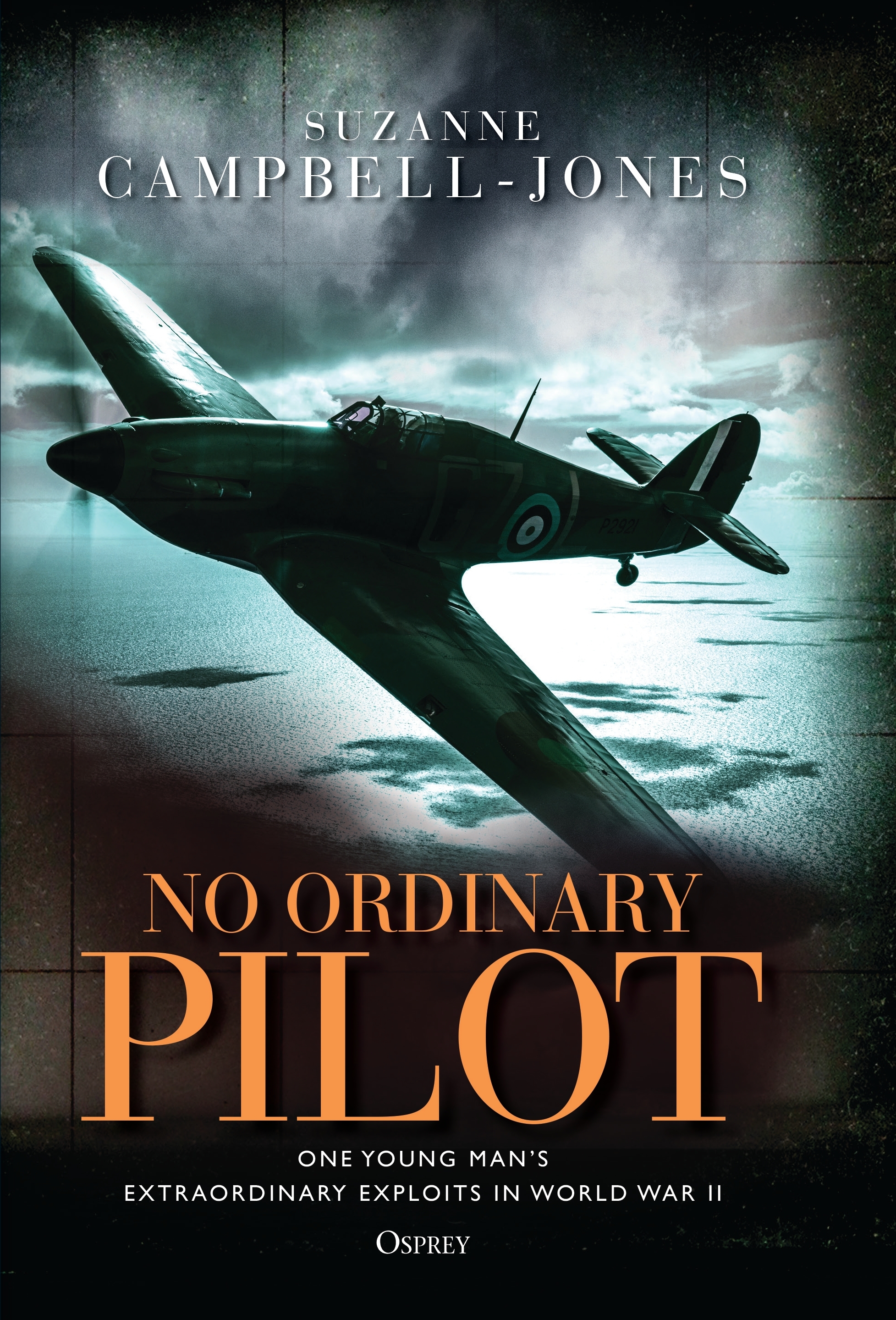 "At daybreak on 6 June, Bob’s squadron were given their target – a gun emplacement near Bayeux. It was a heavy rocketfiring gun that was menacing one of the critical invasion beaches.

The Typhoons swept inland. Bob could see flames and smoke spouting from US and UK warships as their guns pounded shore installations. Landing craft travelled to and fro delivering troops ashore. The whole shoreline was covered in smoke and explosions. He led the Typhoon pilots in a desperate search for the gun. It had to be silenced. It was firing directly along the line of the invading troops. Not one of the pilots could find it. Aircraft after aircraft dived down, searched for the well-camouflaged weapon, and failed to find it. They directed their bombs at the exact point on the map where they had been briefed to look. Disappointed and with a bitter sense of anticlimax, Bob turned his formation back towards the beaches and home to England.

As they crossed the French coast he saw a battleship firing heavy 15in. guns. The whole ship was enveloped in smoke and flames as each broadside fired. He realised with a jolt that at the height they were flying they were probably crossing the line of flight of the shells as they fell on the coast behind the beaches. He took the squadron down to sea level. As he dived down there were several jolts in the clear air. He saw a blurred object, a shell, hurtling through the air in front of him. Somehow, all of the squadron got home safely. Later in the day they would be back over France. It was the first of daily or twice-daily sorties over France that would last for weeks. ‘The longest day’ did not achieve all its objectives but it changed the course of the war in Europe.

By the time Bob and his squadron of Typhoons flew their second sortie on D-Day, the English Channel was grey with ships delivering troops and equipment. On this occasion Bob’s brief was to seek out and destroy enemy troops reported to be advancing towards the beachheads. The Typhoons circled south of Caen and saw a column of troops heading towards the town. The convoy seemed to be stationary, with vehicles nose to tail. Bob dived into the attack, loosing his bombs, and then took a steep turn to come back again.

On the second pass, the squadron of Typhoons strafed the length of the road with devastating 22mm cannon fire. As he manoeuvred, Bob saw the upturned faces of the German troops still embarked in their open troop transports, heading for the front. He was struck by the bravery and remarkable discipline of the men. It must have been terrifying to be attacked at such close quarters. Climbing away, he could see that many of the vehicles were on fire and the road was pockmarked with craters. It was a sobering sight. He had never seen the enemy so close. It made up for what they had thought was their earlier failure to find the gun battery behind the beach. Several days later, they learned that their early morning attack had silenced the rocket gun. They had either destroyed or damaged it. Both their D-Day sorties had therefore been a success."

The next extract is part of an account of being parachuted in behind the front lines on D-Day, as recounted in Airborne by Ian Gardner and Col. Ed Shames, which is based on Shames’s wartime diaries of his time as a member of the legendary ‘Band of Brothers’. 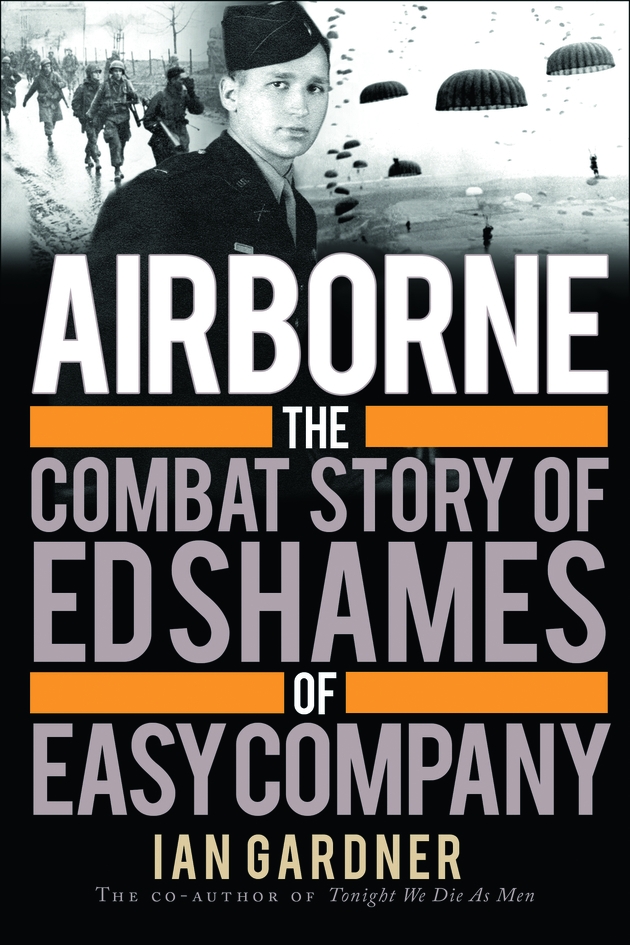 "The minute-long descent gave me plenty of time to look around at the incredible “firework” display across the peninsula. I was heading for a burning industrial area and began desperately trying to control my drift before landing heavily amongst a herd of cows in a muddy yard. A nearby building was on fire and I could see a tall chimney towering above me. Below it, illuminated in the flames, was a logo depicting a carnation… God, no – it can’t be? Christ Almighty, I couldn’t believe that I might be on the edge of Carentan, inside the Gloria Milk Factory! My sand table words “AVOID AT ALL COSTS” began running through my head over and over again. Physically shaking, I cut the risers that connected the main ’chute to my harness, assembled and loaded my M1, shouldered my equipment and moved out toward the Bassin à Flot, the canal that connected Carentan with the Douve.

Clambering over the perimeter fence, I could hear the cows mooing. The noise they were making probably saved my life! I didn’t see anybody else from my aircraft. Most of those poor bastards would have landed behind me across the city and wouldn’t have stood a chance. Yes, I was damn lucky but I still had to find a way across the Douve and that wasn’t going to be easy.

A little later we passed a derelict farm that was set back from the road. I was amazed that we had got this far and not been seen. We soon came to another, which looked as though it might be occupied and decided to ask for help. I reasoned that it was probably safer to approach an isolated building because if challenged, we could easily withdraw and carry on down the road. Deploying the men around the house, I knocked on the door. An elderly man answered, and I told him that I was an American and the invasion had begun. He must’ve understood because he almost collapsed with shock. From somewhere behind, a woman started to scream hysterically. I forced my way past the old guy, clamped my hands over the woman’s mouth and carefully lowered her to the ground. After she calmed down a little, I got on the floor beside her and encouraged the old man to do the same. I wanted to show the Frenchman my map.

Illuminated by torchlight underneath a raincoat, I pointed at Ste-Mère Église and the old man pointed at Brévands – the settlement opposite our objective. He then showed me the location of a nearby minefield but I nearly had a fit when he gesticulated toward Carentan and a German vehicle park – “Allemagne camion ici, ici”– that we’d passed back down the lane! Thankfully the farmer didn’t seem to think that there were any more enemy soldiers between his house and the Douve.

Now certain of our exact position, as I doubled the men up the road toward the lockkeepers’ cottages we noticed two figures staggering toward us. As a regiment we’d been told not to open fire on anything unless it was totally necessary [so larger enemy forces were not alerted to their presence]. These two men stank of booze, and were probably returning from a night out. I ordered that their throats be cut and during the struggle one of the Germans discharged his pistol and the bullet grazed the bridge of my nose."

Our final extract comes from The Pointblank Directive, in which L. Douglas Keeney analyzes recently declassified WWII files to describe the events of “Pointblank”—the plan devised by General Henry H. “Hap” Arnold, General Carl A. “Tooey” Spaatz, and General James “Jimmy” Doolittle to clear the skies over the D-Day beaches. 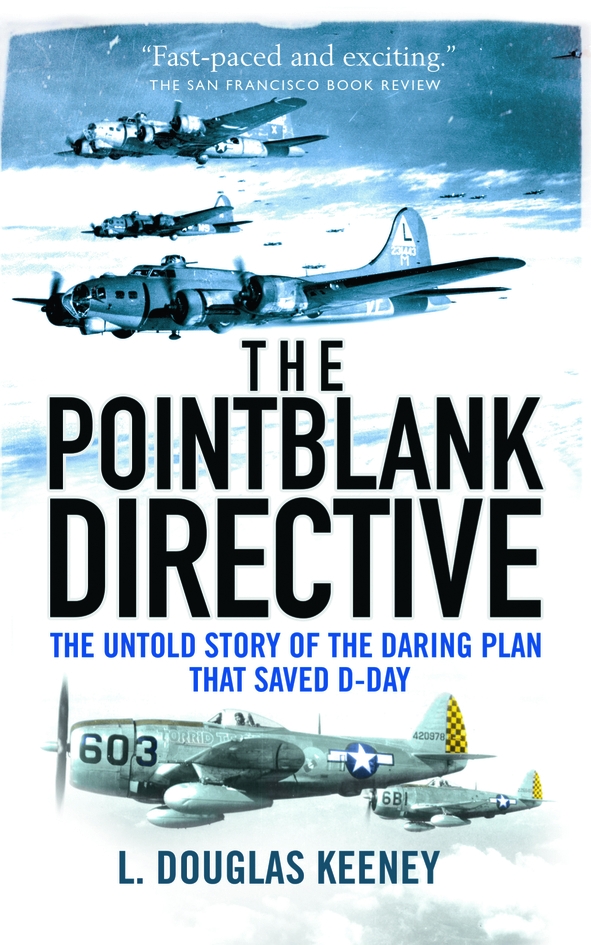 "The bombing was ineffective, and on Omaha Beach, the consequences were particularly bad. Unaffected by the very attack that was meant to silence them, the big German guns kept barking their deadly projectiles 25,000 yards out to sea, and the German machine gun nests on the bluffs launched unobstructed fields of fire across the sand. Inside the crowded Higgins boats, the American soldiers rocked left and right as the waves spit over the bow ramps while they motored toward the beach.

The first wave of soldiers had almost no chance. The Germans poured fire into the men coming ashore with such devastation that a retreat was nearly ordered.

Meanwhile, the fighters climbed through the clouds and spread out into their patrol sectors. Each group went to their assigned positions. Some formed the perimeter wall that would cordon off the landings from the interior, some flew escort, while others found ground targets and bombed away. Said one fighter pilot, just twenty years old at the time, who was covering the landings, “Our job was to go over Omaha Beach at 3,000 feet and circle it, so that if enemy fighters came in to strafe the beach we’d shoot them down. And then there were other groups that would be at 5,000, 8,000, 12,000 [feet]; they were stacked just like that … Here I am, three thousand feet above the beach. I could see the ships starting to come in the daylight, and all of a sudden a blanket of fire from the ships to the shore, and then from the shore to the ships. And then I saw the landing barges.” A cloud passed beneath his fighter as the ramps on the landing craft dropped and the soldiers surged into the surf. Interlacing fields of machine gun fire brought them down, one young soldier at a time. The helplessness he felt was inconceivable. Some boys coming ashore scarcely advanced a step before being shot dead. “It was a slaughter,” he said, and that was all.

Howard Hightower had a similar view as his group of P-38s flew top cover over the Higgins boats as they motored toward the landing area. Hightower admired the orderly line of their advance, each boat packed with thirty-six combat soldiers. “I remember we flew cover over a group of small landing craft. They appeared to be 12–14 feet wide, 40–50 feet long, square nosed, low-sided and filled with men. The boats were in excellent formation with several boats abreast and stretched out for a fair distance.” He craned his neck to look down and saw the men below him nearly face-to-face. “As I flew over the gray water this fog and scud shrouded day I looked down at the men huddled together in their boats and they in turn watched us, turning their faces upward as we passed near. When they did this, you could see a solid patch of white faces in the dullness that surrounded them.” His squadron completed eight D-Day missions that day."