I had been playing a lot of different skirmish games at my local club (the wonderful War & Peace) and I was getting a little frustrated with my exceptionally poor dice rolls. No matter the roll, they always seemed to fail me. So, that got me thinking: if only there was a way to know how good my dice rolls were in advance. Of course, apart from having some sort of telepathic abilities to predict the outcome, this was a complete lost cause. 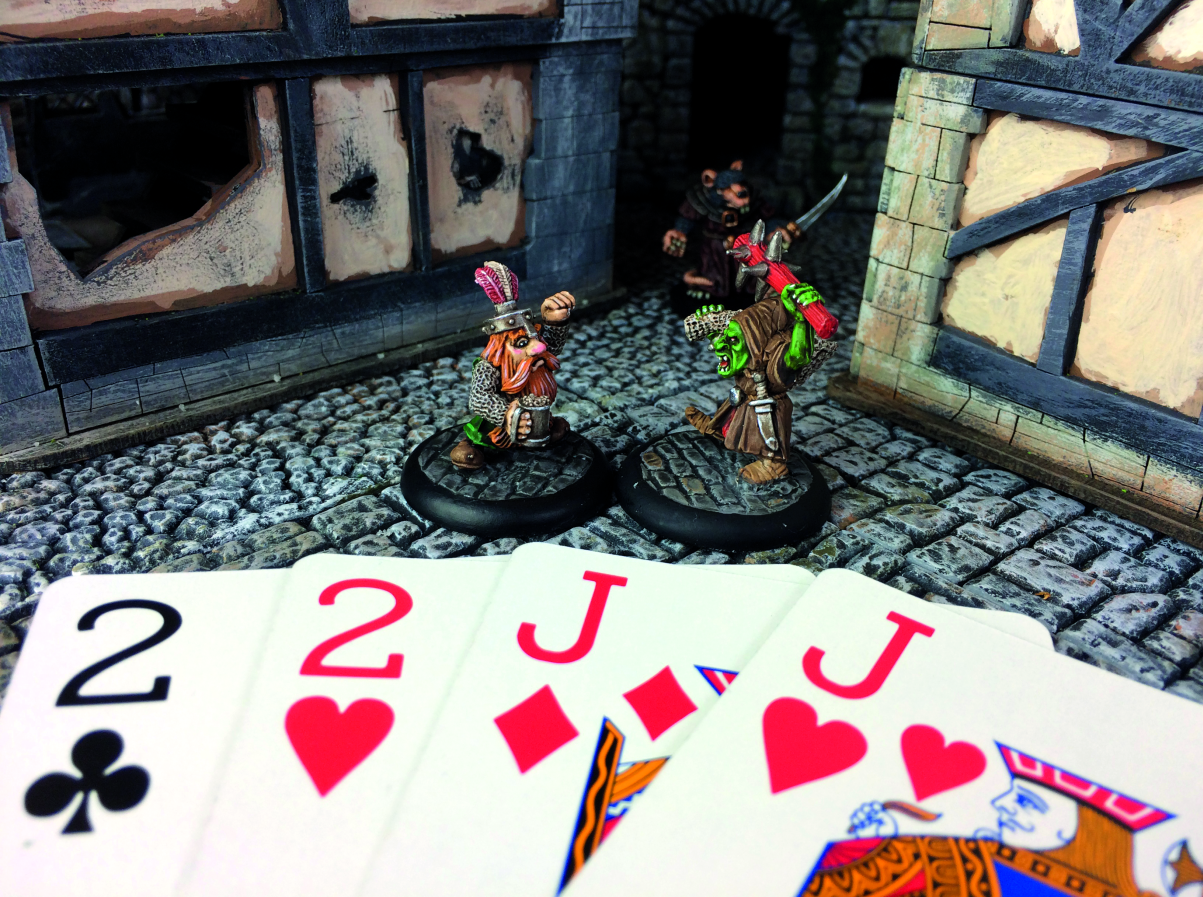 Instead, I remembered the numerous poker games I’d played over the years. With poker you have the ability to see how strong your hand is before going up against an opponent. But there’s also the opportunity to bluff against your foe with a weaker hand - something you can’t really do with a dice roll. Of course, your opponent could be bluffing too, so there’s still that element of unpredictability (a little like dice-based combat). At this point a light went off in my head as I considered combining the two.

Around this time I also had a long commute, so I spent this time wisely devising a system that could combine the two styles of gameplay. The basic idea was to give each player a hand of cards that they could use during combat instead of more typical dice rolls. In order to determine the victor, both would play poker hands and the strongest would be the winner. For example, one player could lay down four cards to play two pairs, while their opponent might only have a pair, which would mean they would lose.

Both players compare the hands that have been played (using a handy chart of poker hands at the back of the book) and the difference between the strength of the hands played is the number of wounds caused.

However, I also wanted to ensure there was a mix of weak and strong units to keep players on their toes. As a result, although the player always has a hand of at least five cards that they can use to create their poker ‘attacks’, weaker characters can only play a maximum of two cards (so they’re restricted to a pair) while stronger characters can play up to five cards, potentially unlocking the legendary royal flush.

Of course, Kobolds & Cobblestones is based around the dodgy criminal gangs of Ordinsport, so you don’t always have to play fair. For each ally you have in contact with the same enemy, you can play an extra card in your hand. This means if you’re able to swarm the opponent with ‘runts’ you can play a full five cards and overwhelm even the strongest of foe.

Just like poker, there’s also a strong element of bluffing involved. You see in combat, both players lay down cards - one to attack and one to defend. In the example above, the player could have swarmed round the opponent so it looked like they were about to play a strong hand. In order to defend against this potential powerful strike, the defending player attempts to block it by playing a strong hand, e.g. a full house or straight. However, this was all a ruse by the attacker because they had no intention of playing a strong hand themselves. Instead they just wanted to force their opponent to ‘waste’ a strong hand. 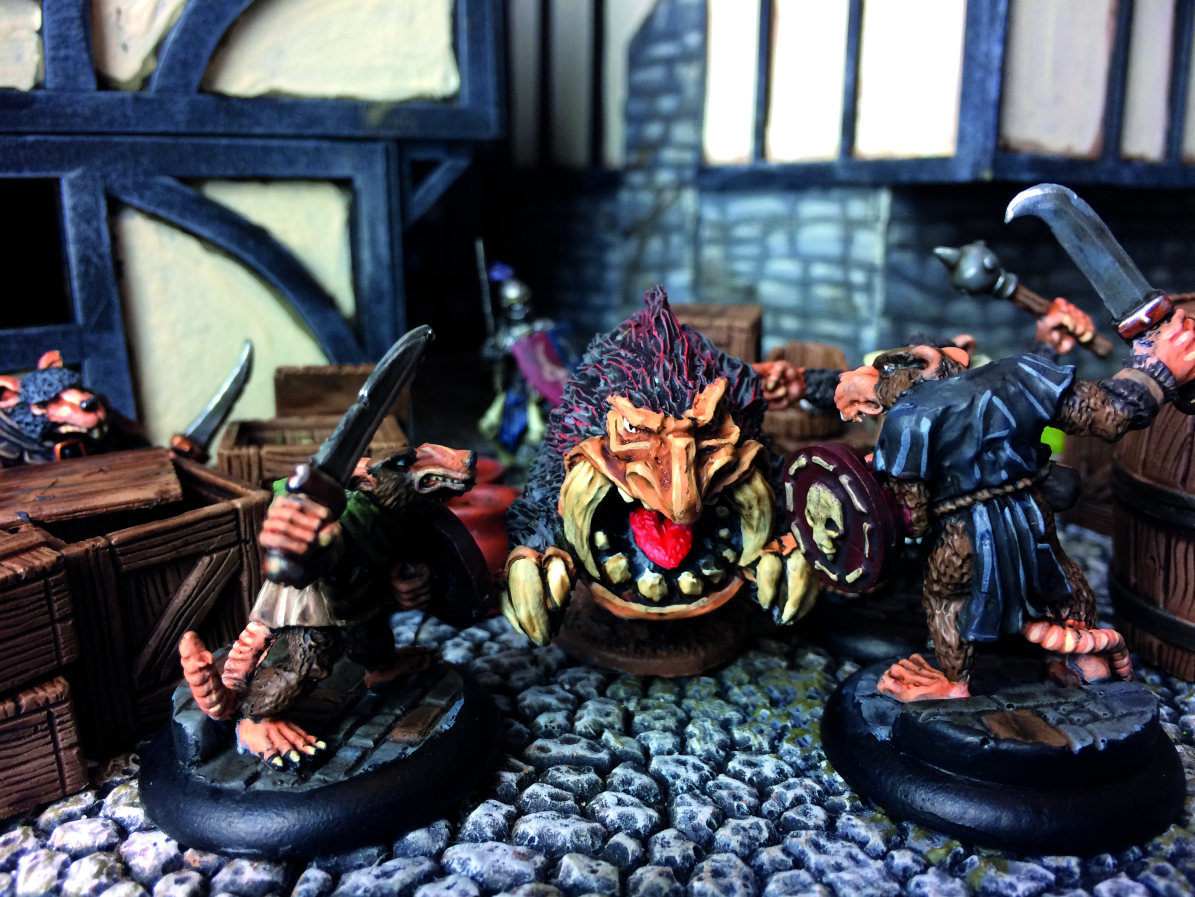 Alongside this, you’ve also got the potential to trigger Critical Hits during combat. This could be something as simple as causing extra damage or knocking someone down, to more complicated aspects like dodging away or poisoning a foe.

Critical Hits are triggered depending upon the colour of the cards you play. In Ordinsport the classic fantasy races (orcs, elves, ratmen, goblins, etc.) are all meant to be living in perfect harmony, but old habits die hard and the past has a tendency to raise its ugly head. As a result, traditionally ‘good’ races (elves, humans, dwarfs, etc.) trigger Critical Hits when playing red cards (hearts and diamonds) while ‘bad’ races (goblins, orcs, undead, ratmen, etc.) trigger Critical Hits when playing black cards (spades and clubs).

This means that along with trying to play the strongest hand possible, you’ve also got to try and keep an eye on the colour to trigger those all-important Critical Hits.

Well, I hope you enjoyed that brief look at how card-based combat works in Kobolds & Cobbletones. However, that’s only the start of the game mechanics and in future blogs, we’ll look at how to build your gang, using magic spells and explaining a bit more about the setting of Ordinsport.

Kobolds & Cobblestones: Fantasy Gang Rumbles will be out on 25 January. Preorder your copy today!