Valley of the Shadow is the dramatic re-telling of the climactic battle of the First Indochina War, which saw French forces expelled from their former colony and air-land base in the valley of Dien Bien Phu, setting the stage for the 'American War' in Vietnam.

Today on the blog, author Kevin Boylan looks at some of the homemade Vietnamese Heavy Weapons that were adopted by the VPA during the conflict.

During the early years of the First Indochinese War (1947–1954), the Communist-led Vietnamese People’s Army (VPA) was armed chiefly with arms that were seized from Japanese occupation troops at the end of World War I, purchased from Nationalist Chinese troops that occupied northern Indochina in 1945-1946, or captured from the French. These included few heavy weapons (artillery pieces, mortars, bazookas, etc.) and ammunition for them was scarce. This situation would change dramatically after Mao Zedong’s Communists won the Chinese Civil War in 1949, and began sending arms shipments across the border the following year. But until then, the VPA had to manufacture much of its own heavy weaponry in primitive arms factories. According to French military intelligence, the VPA produced 13 different types of mortars, three of grenade launchers, five of bazookas/rocket launchers, and 12 of recoilless guns (not to mention 15 types of small arms).

The first heavy weapons to be fabricated were mortars (súng cối) and bazookas (badôka) as these were easy to manufacture and did not require complex recoil systems. A bazooka is, after all, just an open-ended tube, while a mortar is merely a tube sitting on a baseplate that transmits the recoil forces downward into the ground. Both came in several different calibers because their barrels were made from metal tubes in whatever diameters were available. Thus, 187mm (7.4-inch) super-heavy mortars were made by sawing the tops off steel oxygen tanks, while in southern Vietnam, automobile shock absorber cylinders were converted into mortar barrels. Yet, the VPA also managed to produce copies of 50mm, 60mm, 81mm and 120mm mortars employed by the French, thus facilitating the use of captured ammunition. This was important because a high proportion of its homemade shells were duds. The French estimated that nearly 80 percent of the 66mm (2.36-inch) rockets made for captured M1A1 bazookas in the VPA’s arms factories were defective. Its homemade bazookas closely copied the American M1A1’s design, but had 60mm and 75mm bores. Like other VPA heavy weapons, they were commonly referred to using an alpha-numeric code based on their type and caliber (i.e., the Badôka 60mm was the “B-60”).

VPA bazooka and mortar warheads were generally too small to destroy the concrete bunkers and watchtowers (with walls up to 600mm (24 inches) thick) that the French built to guard key facilities and roads. To increase their firepower, some mortars were provided with over-caliber warheads that greatly exceeded the diameter of their barrels. At the 1954 siege of Dien Bien Phu, for example, 60mm mortars were used to fire massive “torpedo shells” that can probably be equated with several unexploded 90mm x 500mm (3.5 x 20-inch) projectiles recovered by the French. Likewise, some 120mm shells were fired by 81mm mortars during the siege. These and other oversize shells were loaded by inserting an attached rod (or “spigot”) down the mortar’s barrel before firing (thus converting it into a “spigot mortar”). The term “explosive charge launcher” (bộc phá phóng) could be applied to such weapons, but “bomb thrower” (súng phóng bom) was more commonly used although it could refer to recoilless guns as well (see below).

VPA spigot mortars were powerful enough to knock out French bunkers, watchtowers and riverine warships, but these crude indirect-fire weapons had great difficulty scoring direct hits. On the other hand, while direct-fire bazookas could accurately hit such targets at close and short ranges, their warheads were too small to destroy them. What the VPA needed, then, were direct-fire weapons capable of firing warheads as large as those launched by the spigot mortars. This requirement was met by manufacturing crude recoilless guns in two different series designated “SKZ” and “SS.” SKZs were first built in the VPA’s primary base area situated in the mountainous Việt Bắc region near the Chinese border, and were fielded only in northern and central Vietnam. The SS series was produced about 1,300 kilometers (800 miles) away in the waterlogged Rừng Sác (Salty Forest) base area 40 kilometers (24 miles) from Saigon (known to American troops in a later war as the ‘Rung Sat Special Zone’) and were employed only in southern Vietnam. At least some weapons in each series could be classified as “bomb throwers” since they fired large, over-caliber shells, but others – especially SS types – appear to have shot projectiles that fit entirely within their barrels.

SKZs (súng không giật[1]– “gun no shock”) operated on the principle of allowing some of the high-velocity gases generated by the explosion of a shell’s propellant charge to escape through a nozzle at the rear of the weapon, generating forward thrust that counteracted the rearward force of recoil. Their principal designer was Nguyễn Trinh Tiếp, head of the VPA General Headquarters’ Military Research Office. Born in 1924, he studied mathematics and mechanics at college in Hanoi before World War II, and completed the first public engineering course offered in the Democratic Republic of Vietnam just before the outbreak of the First Indochinese War. In 1953, he transferred to the Ministry of Transport, where he would serve in a series of senior posts until he was killed on the job by a US air raid in June 1967.

Like the VPA’s homemade mortars, SKZs were produced in wide variety of calibers including 51mm, 81mm, 120mm, 175mm, but the SKZ-60 was the first and by far the most prolific. Used in action for the first time at the Battle of Phố Lu in February 1950, it was a tripod-mounted weapon 1.3 meters (52 inches) long that weighed 26 kilograms (57 pounds), but could be broken down into three pieces for transport. The standard 120mm shaped-charge warhead, which terminated in a 60mm rod that fit inside the gun barrel, carried a 2.2-kilogram (5-pound) explosive charge that could penetrate 600mm of concrete. But like all its kin, the SKZ-60 was a low-velocity smoothbore (VPA arms factories were incapable of cutting spiral rifling grooves inside gun barrels) and thus was accurate only at close range. Its muzzle velocity was just 75–80 meters (about 250 feet) per second and its effective range a mere 60 meters (200 feet). The low-grade steel tubes used in SKZ manufacture would have burst if larger propellant charges had been used to achieve higher muzzle velocities and ranges. And even if that problem could somehow have been overcome, the lack of rifling would still have hamstrung accuracy.

The same limitations applied to the SS-series recoilless guns, which were the brainchild of engineer Nguyễn Hy Hiền. Born in 1920 or 1921, he excelled in mathematics and philosophy at a high school in Hue, and won a scholarship to attend the prestigious École nationale des ponts et chaussées (National School of Bridges and Roads) in Paris. Arriving in 1939, he completed his studies during World War II and returned to Vietnam only in 1946. He soon joined the VPA and, in order to protect his influential family against French reprisals, adopted the nom de guerre “Lê Tâm” which he used for the rest of his long life. He was still alive in March 2017 and most likely remains so at the time of this writing.

The “SS” designation represented either súng sát (“close-range gun”) since the weapons had much shorter ranges than the homemade mortars that were produced at the same facility, or súng Sác indicating their place of manufacture. SS-series’ designs were similar to those of SKZs, but incorporated a novel recoil-dampening feature in the form of a wooden block (probably clamped to a hinged metal plate) which the backblast expelled from the rear of the gun barrel. This multiplied the forward force generated by the propellant gases and allowed the use of smaller propellant charges than would otherwise have been required. Since VPA units operating in the far south had no access to Chinese largesse and were, therefore, generally short of explosives, this was an important advantage.

Just when SS production kicked off is unclear. One Vietnamese source indicates that it began in 1949, while another suggests that small-scale production commenced as early as the end of 1947 – spurred on by the fact that the materials needed to construct bazookas could not be found in southern Vietnam. Whatever the truth was, many different models were in service by the early 1950s. The light SSAT-32 and SSAT-50 were designed as antitank weapons, and substituted for the bazookas that were typically found in VPA units operating elsewhere in the country. The larger and more cumbersome SS-66, SS-73, SS-81 and SS-88 models were intended for use against watchtowers, and French warships that patrolled the Saigon River and the waterways of the vast Mekong Delta. On one occasion, a shell fired by a submerged SS gun reportedly traveled 40 meters (130 feet) underwater before sinking a ship that was cruising the waters of the Rừng Sác. 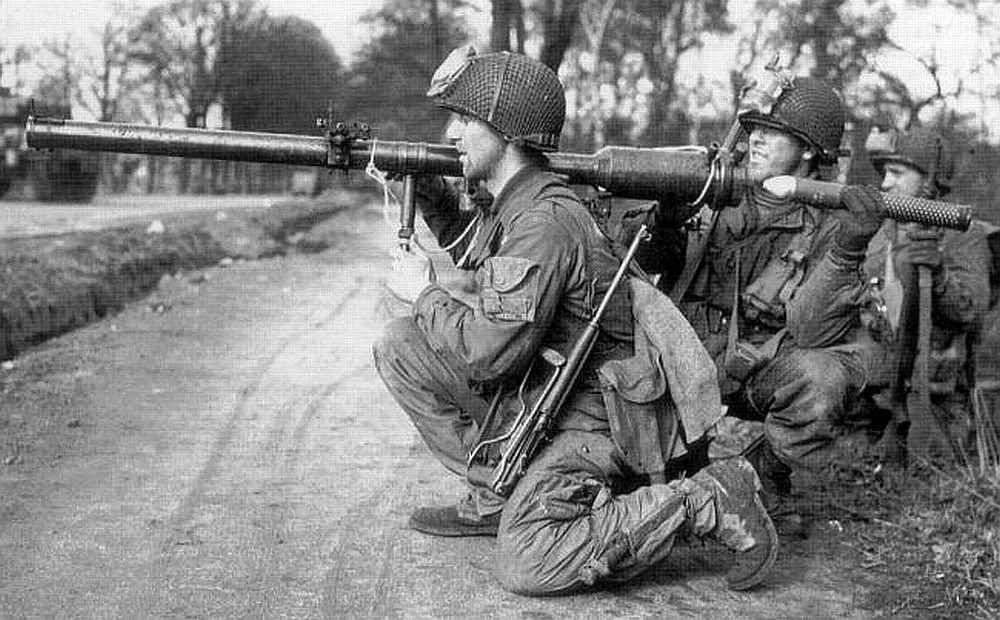 Impressive though their achievements were, the VPA’s homemade recoilless guns came nowhere near matching the performance of contemporary rifled recoilless weapons that had been built to fine tolerances from high-grade steel, and used larger propellant charges to achieve higher muzzle velocities and accurately fire shells to much greater ranges. The VPA naturally coveted precision-built recoilless rifles – which it referred to as DKZs (đại bác không giật – “cannon no shock”) – but had captured only a few from the French before Chinese arms shipments began in 1950. By the end of the war, first-line VPA infantry units were generally equipped with American 57mm M-18s that had been captured during the Chinese Civil War and in Korea, or virtually identical Type-36s that been built in Chinese arms factories. A small number of American 75mm M-20s and perhaps some Chinese Type-51 copies were also shipped across the border before hostilities ceased in 1954. Both calibers had muzzle velocities greater than 300 meters (1,000 feet) per second and effective ranges that exceeded 400 meters (1,300 feet) when engaging point targets with shaped-charge shells. Their maximum ranges when bombarding area targets with high explosive shells were far greater – nearly 4 miles (6.3 kilometers) in the case of the M-20. 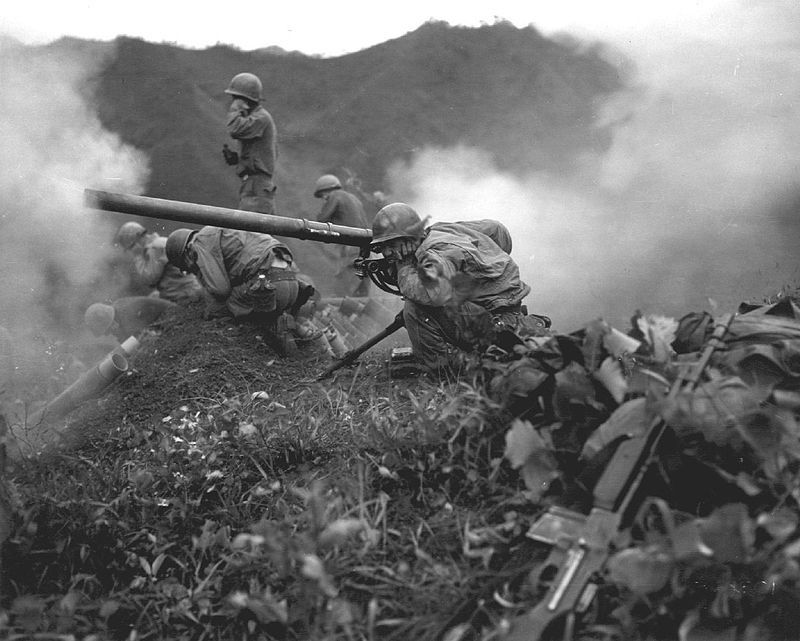 Despite their limitations, the SKZs and SSs filled a vital tactical niche, and the VPA’s homemade bazookas and mortars closely matched the performance of the French weapons on which they were modeled in all respects except ammunition reliability. Overall then, the VPA’s arms manufacturing programs were remarkably successful and stand as a testament to the creativity of the engineers and craftsmen who overcame seemingly insurmountable obstacles imposed by inadequate facilities and material shortages. Certainly, the French were impressed – and sometimes astounded – by how much their enemies accomplished with so little.

Valley of the Shadow is published 26 July 2018, and is now available to pre-order. To get your copy, click here.

[1] In Vietnamese, the letter “g” is pronounced like the letter “z” is in both French and English.