We last spoke to Gabriele Esposito on the blog in September 2017 about his book Men-at-Arms 512: Armies of the Italian Wars of Unification (1), and today we're discussing the next chapter of his two-parter on the Risorgimento.

Your first book looked at Piedmont and Naples, which armies/states are included here?

Well, this second volume looks at all the other Italian states of the time, which were medium or small powers in the peninsula. First of all, we will look at the armed forces of the Papal States: these comprised several famous military units like the Swiss Guard or the Noble Guard, but also much more effective ‘foreign’ or ‘mercenary’ corps (like Swiss infantry regiments). The Papal States took part in the First Italian War of Unification in 1848–1849 and fought a brief conflict with Piedmont in 1860; during the latter, since the Pope was menaced by the Piedmontese forces, Catholic volunteers came from every corner of the globe to enlist in the Papal Army. The most numerous ones came from France, Belgium, Ireland and Austria. They formed distinctive military units, which will be all covered in the book (including the Irish ‘Legion of Saint Patrick’ with its green uniforms). The Papal States were the last Italian states to be conquered by the Piedmontese, being able to resist until 1870. This was mostly possible thanks to the military support of France, which intervened against Garibaldi in 1867 in order to save Rome. Other minor states covered will include the Grand Duchy of Tuscany, the Duchy of Modena and the Duchy of Parma: these three small countries had quite small military forces, but showed some distinctive military characteristics. In 1860 their armies were briefly united in the Central Italian League, a political entity that has never been analysed before in English.

The first book focused on the first war of the Risorgimento, are the other two the focus in MAA 520?

Yes, this second book will cover all the military events happening in Italy between 1850 and 1870. The main focus will be on the Second and Third Italian Wars of Unification. Obviously, however, most of the space will be devoted to armies (with their organization and uniforms). In this new volume, for example, we will deal with the four ‘revolutionary’ states that were formed during the turbulent months of 1848–1849: the Kingdom of Sicily, the Lombard Provisional Government, the San Marco Republic and the Roman Republic. The first of these seceded from the Kingdom of the Two Sicilies, while the second and third were formed after the inhabitants of northern Italy rose up in revolt against the Austrians. The Roman Republic, instead, was created after the patriots expelled the Pope from the Papal States and was later crushed by a powerful military expedition sent by France. The armies of these four ‘revolutionary’ states have never been studied in English before and thus I hope that my readers will appreciate the chapters and colour plates dedicated to them. 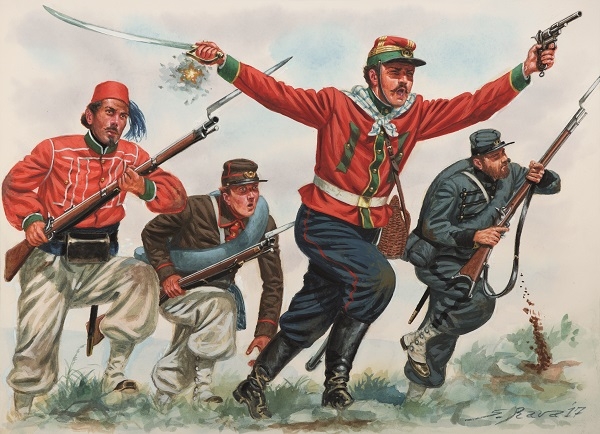 What are some of the key battles during this period?

Well, the 1859 campaign of Piedmont and France against Austria was of fundamental importance for the destiny of Italy; the same can be said of Garibaldi’s 1860 expedition to the Kingdom of the Two Sicilies (which led to the Piedmontese annexation of southern Italy). Under many points of view, it was an incredible ‘military miracle’. At the beginning of the campaign, just 1,089 volunteers disembarked in Sicily with Garibaldi; by the end of it, the famous general had an army of 25,000 soldiers under his orders.

There’s a lot to cover, how is this structured?

After a Chronology that details the military events of 1850–1870, there are dedicated chapters for each army taken into account: Papal States, Grand Duchy of Tuscany, Duchy of Modena, Duchy of Parma, Central Italian League, Kingdom of Sicily, Lombard Provisional Government, San Marco Republic, Roman Republic and Garibaldi’s volunteers (campaigns of 1859, 1860 and 1866). Each chapter has paragraphs devoted to organization and weapons, while the uniforms are described in the Plate Commentaries. A lot to cover in just 48 pages, but as a veteran MAA author I’m by now used to such efforts.

Garibaldi became a popular figure in Italy and across the world, why did volunteer groups gravitate to him? 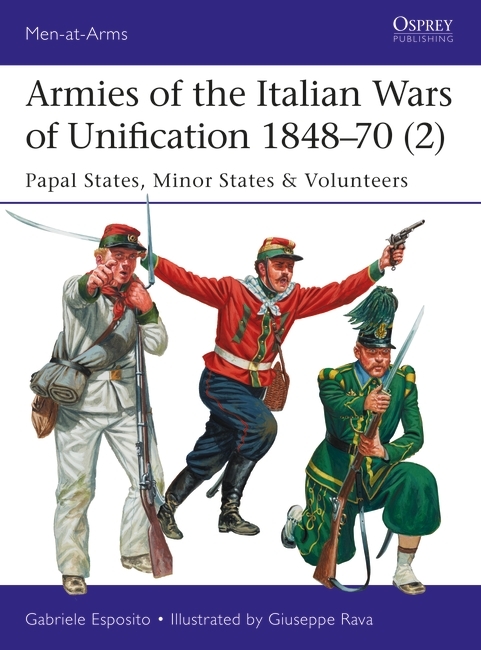 Garibaldi was a great revolutionary leader, with an enormous personal charisma and incredible military capabilities. When still young, he fought in South America at the head of revolutionary military units: firstly in the Brazilian secessionist republic of Rio Grande do Sul and then in the long Uruguayan Civil War (during which he formed a unit of emigré Italian volunteers, the ‘Italian Legion’). In 1848 he returned back to Italy and formed new units of volunteers for the Lombard Provisional Government and the Roman Republic. During1859, inthe months before the outbreak of the war against Austria, thousands of volunteers from the whole Italian territory arrived in Piedmont with the intention of enlisting into the army. The Piedmontese government, preferring to not include these men into the regular forces, decided to create an independent corps of volunteers based on the model of the French Foreign Legion. These volunteers, known as ‘Chasseurs of the Alps’, were put under command of Garibaldi. Later, after the campaign of 1860 in southern Italy, Garibaldi had the opportunity to command another corps of volunteers. In view of the new conflict against Austria, on 6 May 1866 the Italian government decided to form a large corps of volunteers: this had to act independently from the regular army and thus comprised different kinds of units. Obviously command of this Italian Volunteer Corps (‘Corpo Volontari Italiani’) was given to Garibaldi. To sum up, there is a lot regarding Garibaldi in this new book!

To read more about the Papal states, minor states and volunteers during the Risorgimento, click here and pre-order your copy of Men-at-Arms 520.