I was pretty pleased to hear about the Triple Sprue Challenge, because I had long wanted to make a Frostgrave warband out of some older conversions I had lying around, but lacked the essential pieces of the puzzle: a wizard and their apprentice! The models in question were a set of ghost soldiers, the only conversion I’d done is replace human heads with skulls and let a very simple paint scheme do the rest of the work (I’m sure you’ll see them on this blog before too long!) Being ghosts, it was pretty clear that I needed a necromancer to lead the gang. 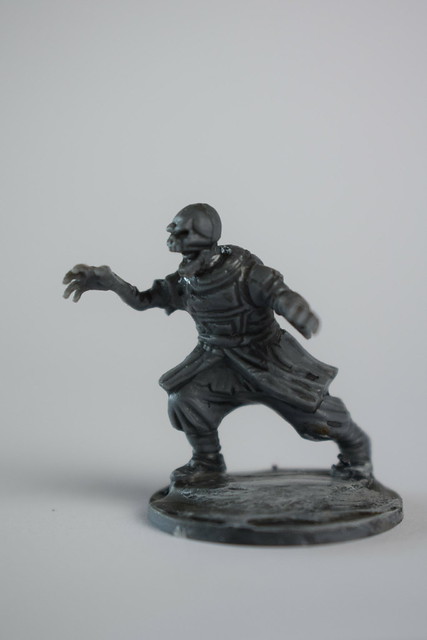 Before even touching the sprues I already knew a few things about the wizard. He searches for the power to control life and death not to escape his mortality, but to deliver it to his restless warriors. For him and his followers, transformation from fully living to a twisted facsimile of immortality wasn’t the aim, but an unintended curse. This wasn’t a character that revelled in his undeath, simply a wizard constrained by a body not completely flesh and blood.

Choosing the skull head was an easy first step. The entire warband was going to be without proper faces, and the wizard was definitely going to fall in line with this pattern. I liked the slimness of the cultist bodies in general, but also how dynamic the one I went for was – I wanted to get the sense that my wizard was agitated and perhaps desperate in his search for the magicks that could free him. I gave him a skeletal arm to highlight his slow decay, but kept the other arm human because I didn’t want him to be fully undead. Having both hands empty and outstretched creates the sense that he is weaving a vast and powerful spell.

He turned out very simple, but then that’s what I wanted. He is clearly twisted by undeath, and there is a lot of scope to make him take centre-stage of the warband with my tool of choice: my paintbrush.