At 4:00AM on 21 February 1916 the German artillery began their bombardment of Verdun, marking the start of a battle that would go on for over 9 months. The target had been selected by German General Erich von Falkenhayn, who was convinced that, by defeating the French at Verdun, ‘England’s best sword would be knocked out of her hand.’  However, he gravely underestimated the resilience of the French forces, who fought courageously to hold off the Germans.

The extract below comes from Campaign 93: Verdun 1916 by William Martin:

Not until the night of 20/21 February were the Germans able to begin their bombardment. It had been snowing since 4.00pm, but the gales had passed. A clear winter’s day was forecast for the morrow. The orders were dispatched.

At 4.00am the three German naval guns opened fire, aiming at the Meuse bridges and the railway station in Verdun. The first round struck the Bishop’s Palace. The bombardment continued at a leisurely pace until the half-light of a winter morning was eclipsed by the simultaneous discharge of over 1,200 guns. The cacophony was discernible as a ground tremor over 200km away. From 7.15 to 8.00am the guns fired at maximum rate on the frontline sectors targeted for assault, then the barrage spread to strike targets on either side. Eventually, there were bombardments taking place along an 80km front, the majority ‘Chinese attacks’ as the British called them – all noise but no action. Nevertheless they served to muddy the intelligence picture: where would the blow fall? 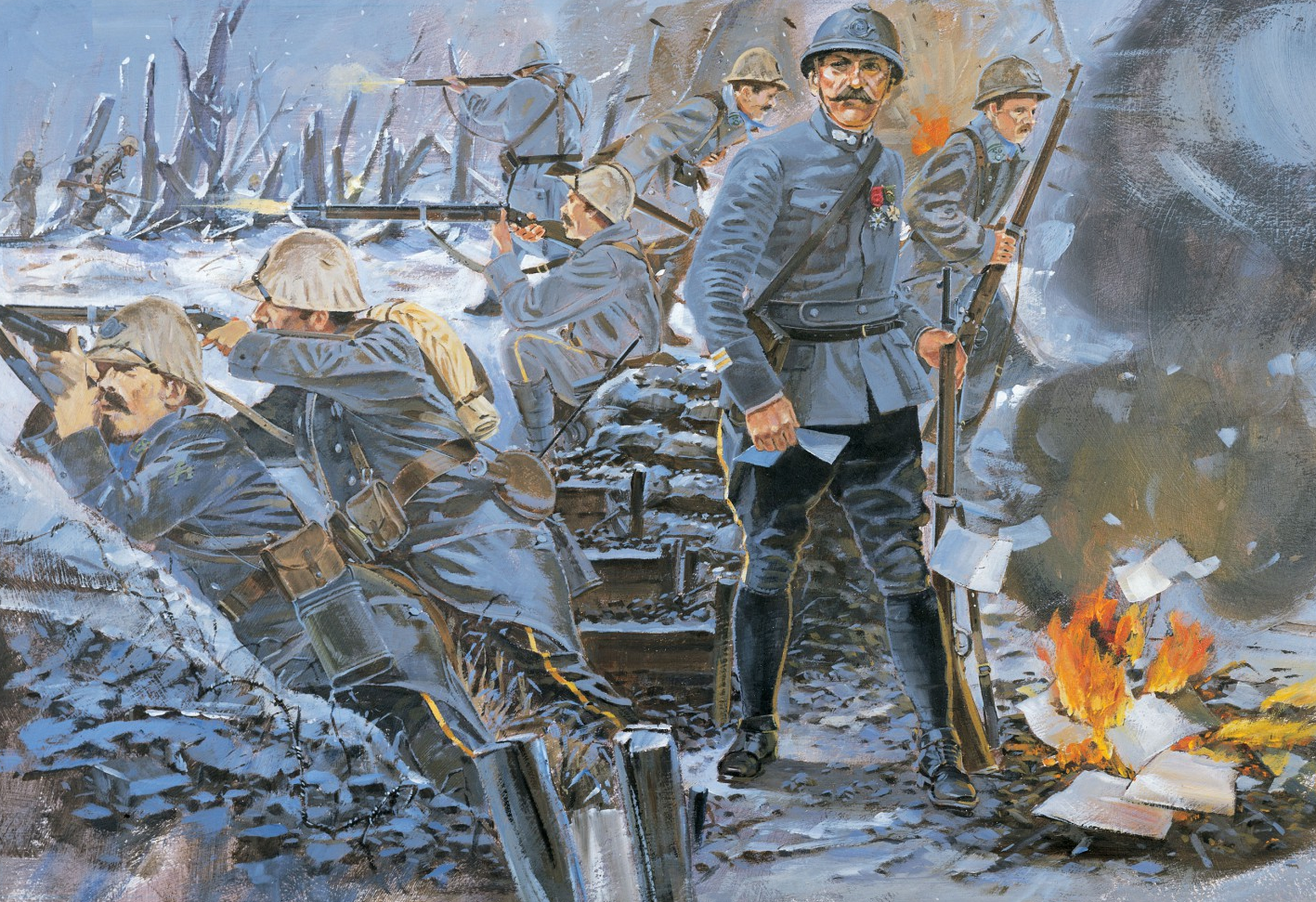 Driant’s Chasseurs knew. The 56th and 59th battalions started that day with 1,300 officers and men. Caporal Maurice Brassard, one of the handful of survivors from the 56th, said that of every five riflemen, ‘two are buried alive in their shattered dug-outs, two are wounded and the fifth waits’.  Some 40 artillery batteries and 50 trench mortars fired an estimated 80,000 rounds at the wood – an area of only 1,300 x 800 metres. Trees were shredded and uprooted. Trenches and dug-outs collapsed. How many of the defenders survived this storm of steel will never be known, but when the bombardment ceased at 4.00pm, handfuls of riflemen emerged from their shelters to do battle. They were red-eyed, deafened and many were injured. Most machine guns were smashed, some men had only grenades and bayonets. The guns continued to pound the area behind the wood when, in the dying light of the afternoon, German flamethrower squads led small assault columns in among the shattered stumps of the Bois des Caures, The Chasseurs were attacked by elements of the 42nd Brigade of the German 21st Division, spearheaded by five pioneer detachments and flamethrower teams.