We continue our commemorations of the centenary of the tank with a blog looking at the development of the tank during the interwar years from Richard Ogorkiewicz, author of Tanks: 100 Years of Evolution.

The successful use of tanks in the latter part of the First World War did not earn them general recognition in its immediate aftermath. Admittedly, towards the end of the War there were ambitious British-French-American plans for the joint production of 10,000 more of them. But they came to nothing and the number of tanks in use dwindled. What is more, some military authorities saw little further use for them beyond the confines of trench warfare in which they were born.

However, tanks were capable of much wider use, although for many years this was limited to small scale actions in close cooperation with the infantry. The prime and almost unique example of this was the Renault FT, a light tank of 7 tons, 4,500 of which were produced in France during and immediately after the War and which was subsequently acquired throughout the world.

US Army operating FTs on the Western Front, 1918

With one exception, no more tanks were produced until the late 1920s, except for a small number of experimental vehicles. During the latter stages of the War the British Tank Corps began to experiment with fitting more powerful engines in tanks in order to increase their speed and attained 15 mph with a modified tank, which was almost four times its  maximum speed in its standard configuration and twice the maximum speed of other tanks produced by then.

Further development led immediately after the War to the construction in Britain of the experimental Medium D tank which was capable of a speed of 20 mph. This opened the possibility of a much more mobile use of tanks which was first put into effect by the Royal Tank Corps using Vickers Medium tanks. These were also capable of a maximum speed of 20 mph but only 166 of them were built and they were the only tanks in the world to be produced in any number until the late 1920s,

An even higher speed of 42 mph was attained in 1928 in the United States by Christie's experimental tank. His design was copied 3 years later by the Soviet Army in the form of its BT series of fast tanks and 6 years later still the independent suspension, which was his tank's outstanding feature, was also adopted for the British ‘cruiser’ tanks.

Progress in the agility of tanks which these increases in speed represented enabled and encouraged a more mobile employment of tanks, at first in Britain and then in other countries. This led to the creation of mechanized or armoured formations, such as the German Panzer divisions, which combined tanks with other arms mounted in vehicles and possessed greater striking power as well as greater operational and tactical mobility than contemporary infantry and cavalry divisions.

The offensive capabilities of the armoured divisions came primarily from their tanks which grew progressively more powerful during the 1930s. At first most of the tanks were relatively light, weighing less than 10 tons and were operated by crews consisting of only two men. Mechanically they represented a considerable advance on the earlier tanks but they were only armed with machine guns. A more effective type of light tank was pioneered in Britain by Vickers Armstrongs who, on their own initiative, brought out in 1928 the Vickers Six Ton Tank which was armed with a 47 mm cannon as well as a machine gun, both mounted in a turret manned by a crew of two men. The Six Ton Tank was acquired by several countries including the Soviet Union where it was copied on a large scale as the T-26. In fact, by the outbreak of the Second Wold War in 1939 about 8,500 of the T-26 had been produced, making it the most numerous tank in the world at the time. 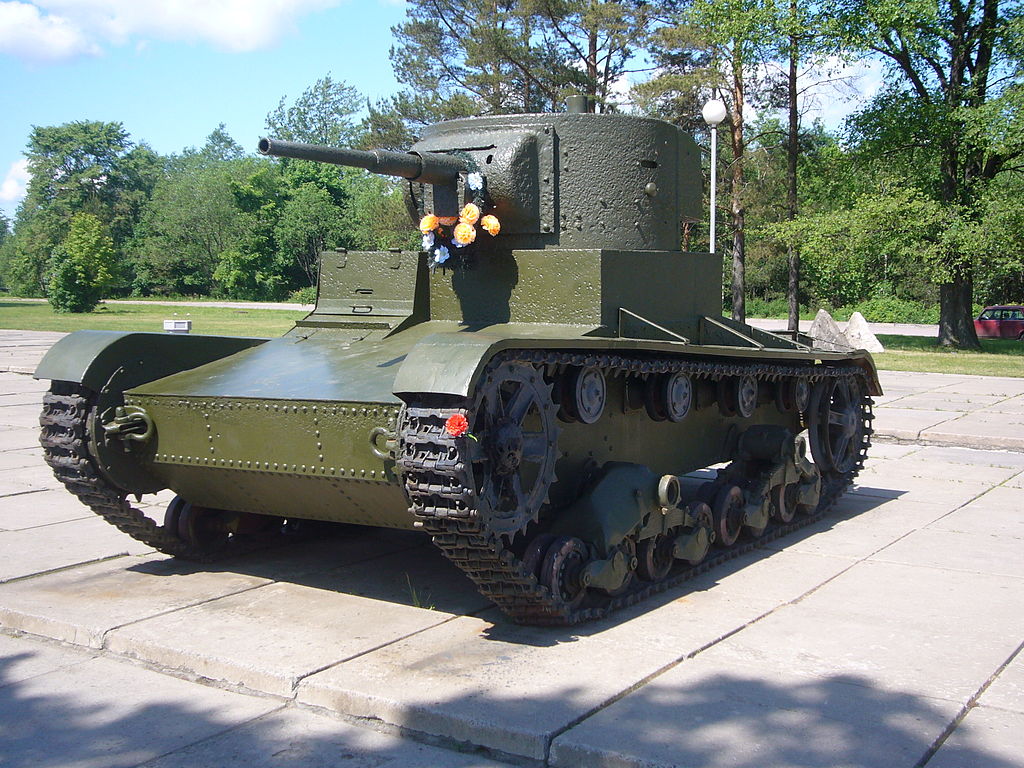 T-26 mod. 1933 at the museum 'Breaching of the Leningrad Blockade' near Kirovsk

Relatively light tanks of the Vickers Six Ton Tank kind, armed with 37 or 47 mm and manned by three or four men, were typical of the late 1930s. However, by then more powerfully armed and heavier tanks, armed not with 37 or 47 mm cannon but with turret-mounted 75 or 76 mm guns, began to come into use. The first of them was the Grosstraktor built secretly in Germany as early 1928. Its example was followed by the Soviet T-28 and later by the German Pz.Kpfw.IV, which became the forerunner of the medium tanks that dominated most of the Second World War.

Richard Ogorkiewicz's Tanks: 100 Years of Evolution is available to purchase on the Osprey online store. Click here for more details.