Martin Pegler is the author of the newly released Weapon 42: Winchester Lever-Action Rifles, as well as a number of other Weapon books including Weapon 1: The Thompson Submachine Gun and Weapon 25: The Vickers-Maxim Machine Gun. In this blog he talks about what drew him towards writing a book on the Winchester.

Deciding what specific firearms to cover in a book for the Weapon series isn’t quite as straightforward as it may seem. Although they may be interesting, some guns are simply too esoteric to appeal to a broad spectrum of readers, while for others, it is so difficult to find reliable technical information – or indeed practical accounts of their usage – that they would defeat even the most determined author. There are, however, some firearms that are simply iconic, but oddly these are quite often overlooked on the grounds that authors feel everything has been written about them already. In fact, this is often not the case, as many of the books that cover these guns are so detailed and contain such in-depth research that their appeal is primarily to the expert. 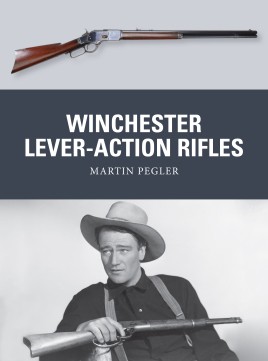 When I began to contribute to the series for Osprey, I felt that some of these famous firearms deserved covering at a more accessible level so that the basic development and technical information was readily available to the casual enthusiast, without the need to wade through a lengthy, and often expensive, tome. Having covered the development and military use of the Thompson submachine gun, the Lee-Enfield rifle and the Vickers/Maxim machine guns, I wanted to write something that was a little different. Having always had a soft spot for firearms of the American West, one immediately sprang to mind, the evocative Winchester rifle. The technical development of the Winchester is in itself a fascinating account; the fact that the Holy Grail of firearms development – repeating fire – was achieved at a time when most armies were still using single shot muzzle-loading muskets is remarkable. The gestation period for any new form of firearm can usually be measured over decades, but the rifle created by Benjamin Tyler Henry can trace its history back a mere 12 years, to the Volition Repeating Rifle invented by Walter Hunt. Henry was able to adopt, adapt and improve the design to the point where functioning rifles were available by 1860. Of course, he was materially aided by a hugely useful and fortunately coincidental improvement in ammunition manufacture, with the introduction of the rimfire cartridge. 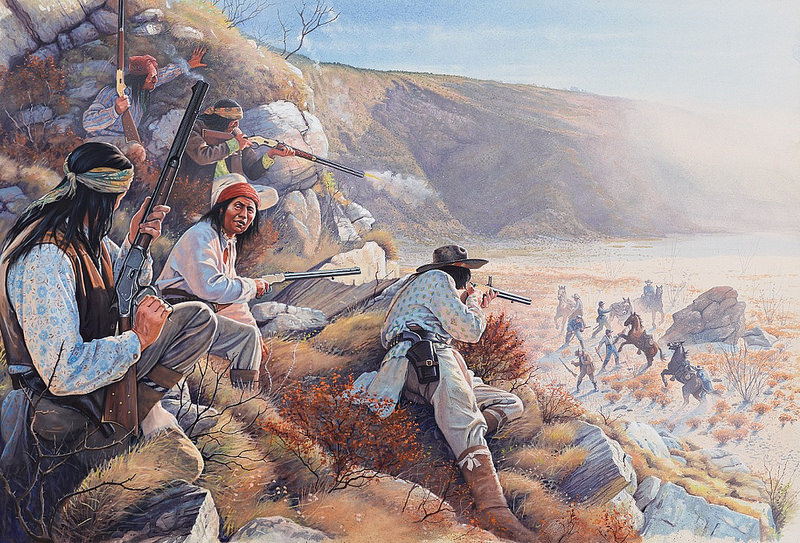 Most military firearms have service lives that rarely stray beyond their intended and rather specific use, but the Henry was different. It was never really accepted as a military weapon during the American Civil War and was adopted in relatively small numbers. With the post-Civil War acquisition of the factory by Oliver Winchester, and its re-naming as The Winchester Repeating Arms Company, came a new era of development that resulted in the Winchester name becoming the single best-known brand in the United States. Improvements to the design, including adding the unique side-loading gate, were engineered by Nelson King; however, the strengthening of the notoriously weak mechanism to cope with the increasingly powerful cartridges was left to John Moses Browning, arguably the most talented gunsmith of the 19th century. A myriad of Winchester rifles appeared one after the other; the Models of 1866, 1873, 1876, 1886, 1892, 1894 and 1895 all sold in their millions and helped shape the course of American history. Few people also appreciate that the first fully automatic gas-operated rifle was actually a Winchester-based design that Hiram Maxim used as a test-bed in 1884 for his subsequent development of the machine gun.

There are countless stories of the use of these rifles by lawmen, cowboys, bandits and Native Americans which I think bring alive the history of these guns. Neither was this lost on the rapidly expanding film industry, who adopted the Winchester rifle, along with the Colt .45 revolver, as an industry standard. In various guises, the Winchesters appeared in hundreds of films, and one, the Model 1873, even had a film made about it, an almost unique tribute to a firearm. It is for no small reason that the Winchester is known as the ‘Gun that Won the West.’