With WPN 40: The Gatling Gun coming from Osprey in May, it seems 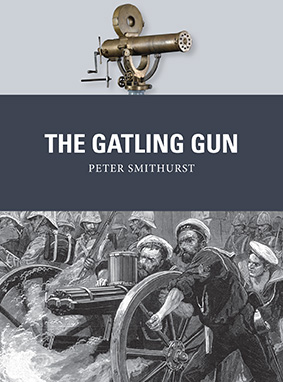 the perfect time to revisit the Gatling Gun’s most famous appearance in poetry…with just one little problem.

In 1892, the English statesman, novelist and poet, Henry Newbolt wrote a poem entitled ‘Vitaï Lampada’ which tells how a schoolboy and future soldier learns about duty while playing cricket. It is the second stanza of the poem where the Gatling Gun gets its famous mention during a description of the 1895 battle of Abu Klea:

The sand of the desert is sodden red,—

Red with the wreck of a square that broke;—

The Gatling's jammed and the Colonel dead,

And the regiment blind with dust and smoke.

The river of death has brimmed his banks,

And England's far, and Honour a name,

But the voice of a schoolboy rallies the ranks:

The poem became quite famous in its day and remains one of the great bits of verse about British colonial battles. There is just one problem from our poor weapon’s point of view – there was no Gatling Gun at the battle of Abu Klea! The British actually had a Gardner machine gun, so any jamming that may or may not have happened should be laid squarely at its feet.