Today marks the anniversary of the Battle of Stamford Bridge, a bloody battle that saw Harald Hardrada slain and his army defeated, bringing the Viking Age to an end. To commemorate the occasion, here is a look at how the way in which the Viking warrior changed over the centuries. 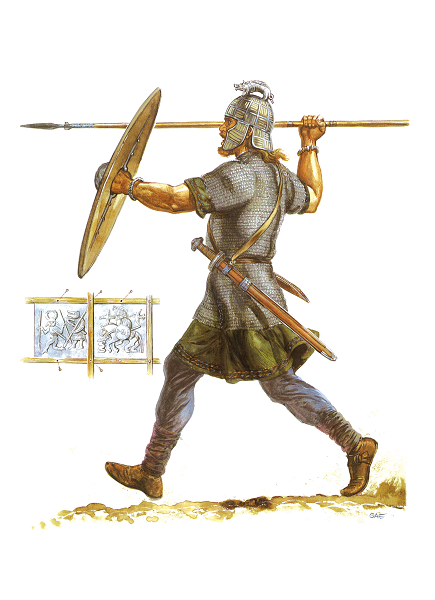 This figure is based on the spearmen depicted on the Torslunda plates from pre-Viking Sweden. The middle-status warrior we see here died over a hundred years before the attack on Lindisfarne and in that respect is an ‘ancestor’ of the Vikings.

The Torslunda plates were dies for decorating the foil plaques used on helmets of the Vendel type. Their subject matter is ceremonial and mythical. The helmet worn by this proto-Viking could be covered with plates of the pictorial kind rather than the corrugated plaques shown. In either case they were held in position by strips of ribbed roil rivetted to the sub-frame. A fixed spectacle vizor would be a possible addition. 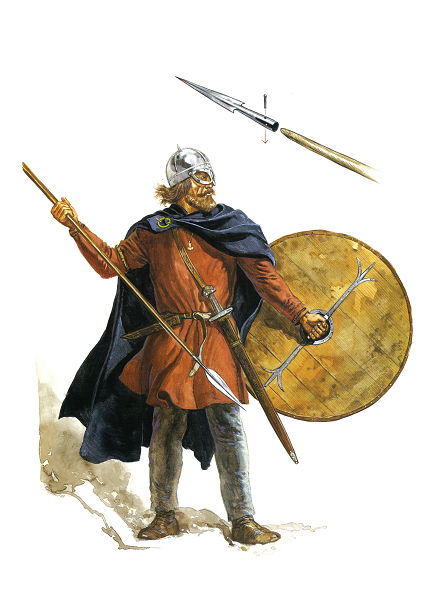 The warrior shown here is of the hersir class at the height of the Nordic threat to Europe. His status is distinguished by his ownership of helmet, gold arming and decorated sword. Non-Christian beliefs are revealed by the hammer-shaped amulet, although caution might lead the Viking to worship Christ on land and Thor when at sea.

The red tunic is dyed with an extract from the roots of the plant Rubia tinctorum. His trousers are of undyed wool. His cloak was made in Iceland and is a dark-coloured version of wadmal cloth. 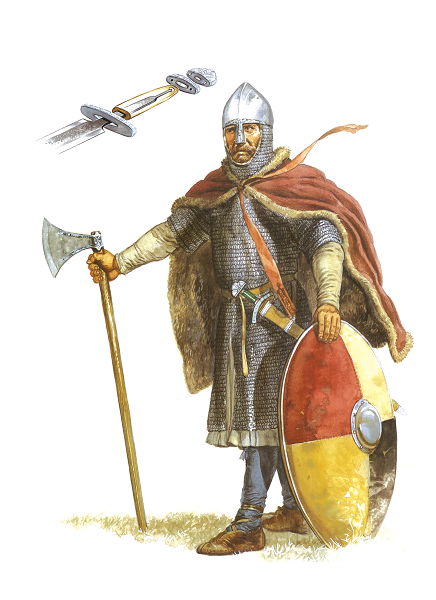 By this period the character of fighting men of middle rank had undergone remarkable changes. The hersir had ceased to be an independent figure in the Norse states, legitimised by wealth, power and ancestry. Instead he was now a representative of royal authority. The legal force which now supported him was regal, national and backed by Christianity. The increased wealth of royal power, through its monopoly of taxation allowed the creation of a new middle class of warrior. This theory of military service had developed from much older concepts of shared kinship, common purpose and benevolent dependency.

Both the local leader and the retained bodyguard could be expected to appear for war equipped like this figure. The helmet is a high domed version of the Wenceslas type (it may be a Central European import). The mail coif, lined with leather at the edges for greater comfort, is a continental influence.

The rest of this warrior's equipment is Scandinavian, in particular the long-handled axe with the broad blade. The three-lobed pommel of the sword indicates it is an heriloom, but stilll sound in combat and valuable as a status item. The shield is also a little archaic for the last fifty years of the period but preferred by the user to the kite-shaped alternative.

For more information on Vikings be sure to check out Warrior 3: Viking Hersir 793-1066, New Vanguard 47: Viking Longship and Men-at-Arms 85: Saxon, Viking and Norman.