Film night at my house usually involves popcorn, beer, a sofa – or even a comfy floor, I’m not that fussy – and of course an epic helping of cinematic perfection. This week we decided to endure Wolfgang Petersen’s rendition of Troy (2004) and, while it’s certainly a far cry from ‘cinematic perfection’, it got me thinking about the wider portrayal of ancient warfare in both the media and film industry alike. Take for example the beautifully choreographed fight scene between Achilles (Brad Pitt) and Hector (Eric Bana) which, although highly entertaining, can hardly been seen as an accurate representation of hoplite warfare. Baking under the punishing heat of the afternoon sun, clad in a heavy, bronze cuirass, greaves and helmet of the traditional hoplite warrior, warfare in Bronze Age Greece would have been a cumbersome, exhausting and decidedly brutal affair. 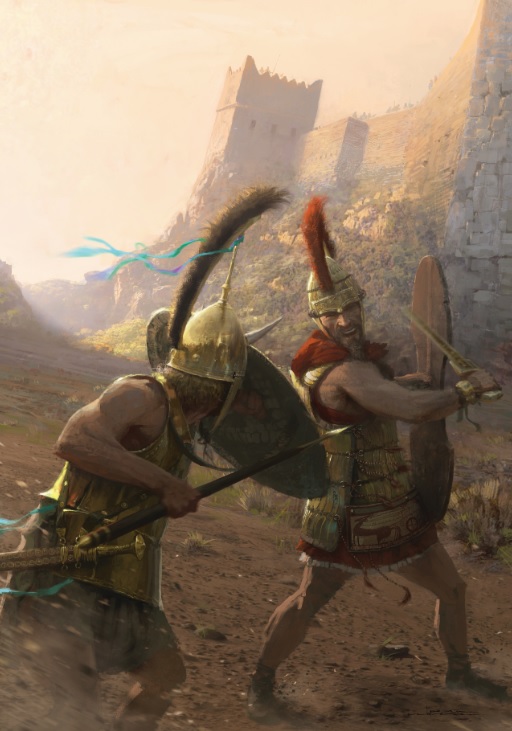 There is a definite lack of aerial attacks in this scene from Myth 8: Troy: Last War of the Heroic Age
Artwork by José Daniel Cabrera Peña

Perhaps most important of all to remember is that engagements of any kind would have been brief and utterly devoid of aerial acrobatics – especially those involving a dramatic leap in an attempt to reach the vulnerable points in your opponent’s armour (sorry Brad). In the face of such conditions the economy of movement meant the difference between life and death. Combatants would hack away until exhaustion set in and the opportunity for a killing blow presented itself, or a lucky strike found an exposed area of flesh. Petersen’s Troy is not alone in its misrepresentation of ancient warfare, there are a host of other films that favour showmanship over reality (300 and its sequel to give but two examples). I’d be interested to hear what you think are the worst (or best) examples of Hollywood warfare? I’m always on the lookout for new additions to movie night!