Having completed my wizard, the clear next step in the challenge was to create his apprentice. Once again, I wanted a character warped by undeath, but this time someone more twisted and malevolent. 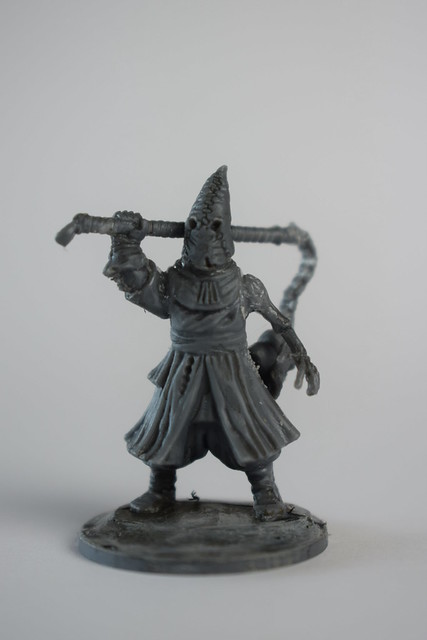 This intention, combined with the fact that I only had two skull heads to work with for my three characters, led me to go for the executioner-style hood. The facelessness of it invokes a strong sinister vibe, and something about it feels angry. To hopefully add to that sense of sinister, I put him atop a cultist body standing straight up, for a much more static pose than the wizard.

I still wanted to convey very clearly that the apprentice is partially undead, so once again went for a skeletal arm. There were a bunch of conflicting ideas for the arms in general for this guy, but like with the wizard, I find that simplicity tends to come across the strongest. I didn’t want it reaching forward, as that would be too much like the wizard himself. Instead, having the arm and down to side, whilst still a bit flexed, implied stillness whilst still being alert.

The final feature, then, was the right arm. I’m not entirely pleased with the outcome here, as I wanted a sense of his weapon resting on his shoulder. Unfortunately, I couldn’t find the appropriate part, nor am I overly deft at modelling, so I don’t know how well this comes across. As he is an apprentice, I removed the axe head and instead attached a chain to the end, with the intention of turning it into some type of censer. Eventually I decided on one of the heads from the barbarian sprue, as some grim flail.

In the end, a model I’m not as excited by as the wizard, but which achieves its main goal – being unlikable.