For the Triple Sprue Challenge, I made the decision right from the outset that I wanted a strong story to carry across my Wizard, Apprentice, and Captain. Once all three have been revealed hopefully this will hold true, but for now here is Ezekiel, my Necromancer. 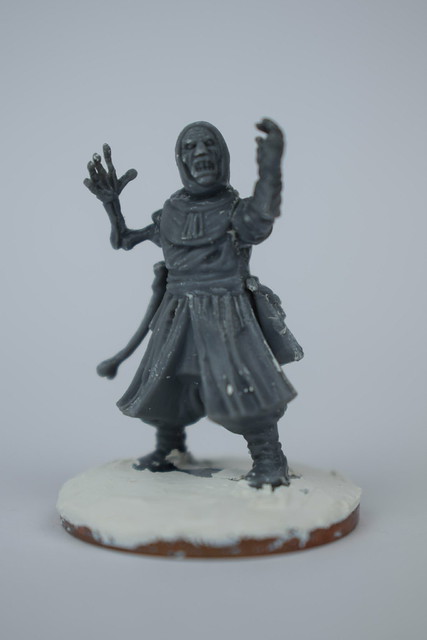 Of my three figures, Ezekiel is definitely the simplest, in part because he was the last one I put together. Nevertheless, I am quite happy with him. The pieces are drawn almost entirely from the Cultist set, with the only exception being the pouch on his left hip, which comes from the Soldier sprue.

I wanted to capture him in the act of casting a spell, whilst also showing the way that his dark magic has ravaged his body. His withered right arm and hideously contorted face (aside: I love this head!) are the price he has paid for his powers, and as he continues to delve into the dark arts no doubt the transformation will continue. But why did he choose this path? Well, all shall be revealed when we look at his Captain and Apprentice.

Given the limitations of the Triple Sprue Challenge and the pieces I had left at my disposal after putting together my other two figures, I’m happy with Ezekiel. I’m toying with the idea of adding some extra detail to the base (perhaps some skeletal arms bursting from the ground) but might just leave him as he is.