The last time I made an order with Reaper miniatures, I just couldn't resist picking this guy up as well. The figure just has so much character. I love the expression on the face. I love the stance.

I have no specific need for him, but then trolls do seem to feature in my life quite a bit...  I'm sure he'll make it into a game of Frostgrave or Ghost Archipelago or Rangers.  In fact, I might even use him as a giant in Oathmark.

I realize now I should have photographed him with another figure to show off just how big he is. For example, most of my rangers come up to right around the top of his belt...

I'm not sure I completely pulled off the painting of the crystals. I didn't want to make them look too jarring with the rest of the model. Still, I had fun painting it, and I like the finished product well enough, so I'm going to call it a success!

You can read more from Joseph A. McCullough on his blog.

We recently enjoyed a four-day Bank Holiday weekend here so, with the sun shining and the garden already pushed back to a manageable (for now!) state, what better way to pass the time than building and painting some new toys? Nine of them, in fact.

I have built up the unit of pikemen from the initial six to a full ten and reinforced them with a unit of five swordsmen. 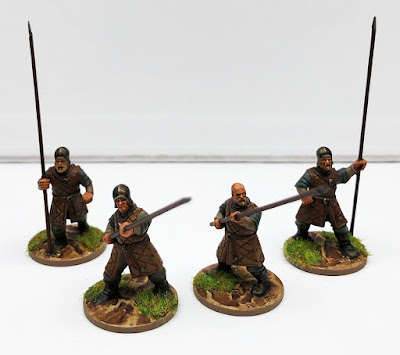 Unsurprisingly, all the figures are still Fireforge Northmen, though this time I did raid my box of archers to supplement the warriors kit. As before, the pikemen with the levelled pikes were the biggest pain to make. Thankfully, these two will be the last! I'm not planning on another unit of pike for this force and I'm happy enough with two ranks of five (the officer being the extra front-rank figure alongside the chaps with levelled pikes). It's useful to have a secondary officer figure for when I want to split the unit into two groups of five (which will almost certainly be the case given my movement trays), so I threw in another bare-headed figure - if Games Workshop has taught me anything, it's that officers never wear helmets! As it happens, I'm identifying the officers in this force by using some of the officer components from the kits - a torso with a gorget and and arm with a hefty pauldron, so this guy is clearly an NCO. Going forward, the pauldrons may end up on different arms, depending on which pieces I use, but the gorget is a nice, consistent reference point.

The swordsmen were pretty much a straight build out the box, albeit with a couple of archer torsos mixed in for variety (and because the warriors box only builds 12 models) and the head from a Frostgrave: Ghost Archipelago crewman. I almost messed that guy up - after gluing everything together, I spotted a mould line I'd missed on the side of his head. Taking a scalpel to it, I promptly carved a notch out of his ear. Rather than chuck the model or attempt to remove and replace the head, I smoothed things out with some polystyrene cement and decided that he's going to be called "Somebody Half-Ear". As above, he'll probably play the role of NCO if and when I expand this unit to ten.

All in all, I'm pleased with them. The figures are pleasingly uncomplicated and they paint up really quickly. In the absence of real inspiration for what I'm going to do for command or character figures for the force, I think I'll just move onto the next unit - archers or cavalry. I suspect the former, as I've not yet decided how I want to base the cavalry.

Head to Phil's blog to read more from him!

This week I continued to work on my Dwarves - I had thought that staying home over the long weekend would mean I'd easily get them finished, but it actually meant I got a lot of other jobs done around the house. I've only managed to get one of the figures completely finished, but the rest of the unit won't take much longer - some highlights, a bit of drybrushing, and they'll be done.

Keeping in the Dwarf spirit, I put together a unit of 10 Dwarf Warriors from the same Dwarf Heavy Infantry kit, and have been creating more characters for my army (a Dwarf Wizard and a Dwarf King, both very much at the WIP stage. I'm trying to sculpt a robe onto my Dwarf Wizard - we'll see how that goes!)

While I didn't get much painting done, I was working on the backstory for this new army I'm working on. The basic idea is that it is a confederation of Dwarven Kingdoms that fall under one overall King. Each Kingdom offers their best soldiers to serve - for instance these Linebreakers all come from one Kingdom and are dressed accordingly, while the Warriors and other infantry will have different paintjobs. Once I've got enough figures painted, I might play a few small games with Dwarves facing off against Dwarves to see which of my figures gets complete control of the Kingdom!

Be sure to let us know what you've been up to in the comments below, or on Facebook or Twitter!