The Triple Sprue Challenge is right up my street – I love kit-bashing, and it’s by far my favourite part of the hobby. However, I’m used to raiding several dozen different boxed sets for components, so limiting myself to just three sprues was a new challenge. Furthermore, I’m really familiar with the Frostgrave models, so looking at them in a new light and finding new conversion potential after having worked with them for so long was my main hurdle. 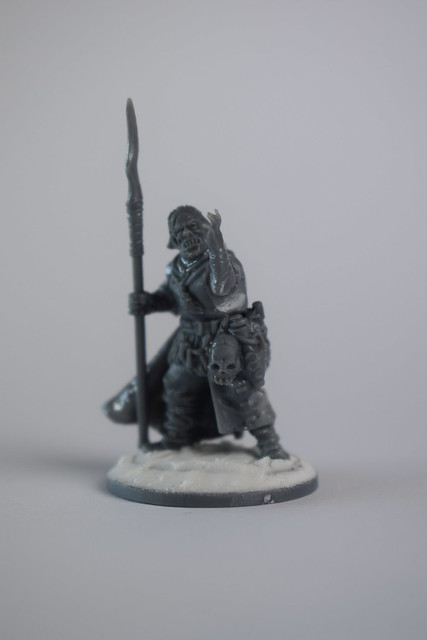 I started with the Wizard, as I tend to for all my warbands. As the main character, the look of the Wizard defines the overall tone of a warband, making him the lynchpin in both game and aesthetic terms.

I’ve done a lot with the Soldiers and the Cultists in the past, so I opted to start off by selecting a Barbarian body. The one I picked, with its fur kilt and hooded cloak, gave me a degree of versatility in defining which school my Wizard would follow – the cloak was smart enough that the fur kilt could just be a nod to the temperature… or he could be a more savage outcast (with a nice cloak). As I tend to do, I opted for the latter.

I’d already pretty much decided that I wanted him to have the spear from the Cultist sprue, and finding a matching left arm gave me the ‘summoning’ pose quite easily. A couple of equipment pieces (a skull and amphora from the Cultists and a scroll pouch from the Soldiers) went on his left hip, because every Wizard needs to be carrying some tools of his trade, which just left the head…

I hummed and hawed over the choice of head for some time. By now, it was clear that my Wizard was running down a Witch/Necromancer route, so I looked for suitably shifty heads. Fortunately, the various sprues have those aplenty. In the end, I went for one of the zombie heads from the Cultist sprue – although it is heavily scarred and lined, it isn’t so far gone that it couldn’t pass a living, and it did fit well with the savage theme. A quick twist and lift, and he’s now staring off at the target of whatever spell he’s casting.

All in all, a very simple model, with minimal conversion work (I shaved the neck joint down a tad) – almost a pure kit-bash.